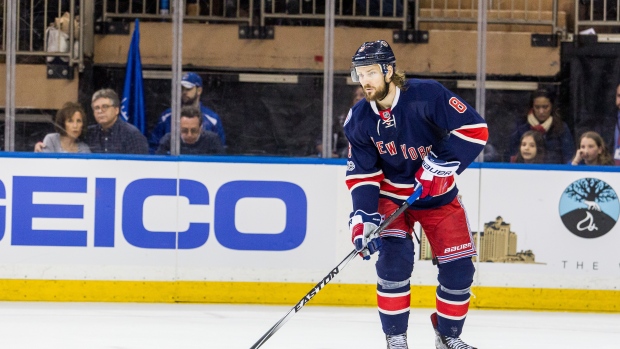 New York Rangers defenceman Kevin Klein has retired after playing parts of 12 seasons in the NHL.

The Rangers announced the retirement of the 32-year-old on Friday.

Klein played in 627 career NHL games with the Rangers and Nashville Predators, totalling 38 goals and 116 assists. He made his NHL debut with the Predators on Dec. 3, 2005, 10 days shy of his 21st birthday.

The Rangers acquired him on Jan. 22, 2014, and he skated in 224 regular season games, registering 22 goals and 50 assists, along with a plus-49 rating. During his tenure in New York, Klein led Rangers defencemen in even strength goals (22) and game-winning goals (eight).

Klein was bothered by back spasms this past season and had three goals and 11 assists in 60 regular-season games. He played in one of the Rangers' 12 playoffs games and had an assist.

Klein helped his team advance to the playoffs in seven of his nine full seasons in the NHL, including each of his four seasons with the Rangers. He played in 73 career playoff games with four goals and 15 assists. He helped the Rangers' reach the 2014 Stanley Cup Final.

The 37th overall pick in the 2003 draft, Klein helped the Predators advance to the playoffs three times.

"I would like to thank both the Nashville Predators and New York Rangers organizations for giving me the opportunity to fulfil my dream of playing in the NHL," Klein said in a statement.

Klein's retirement is the latest in the Rangers' roster changes since they were eliminated by Ottawa in the second round of the playoffs. Defenceman Dan Girardi was bought out last month and signed with Tampa Bay last Saturday, Center Derek Stepan and backup goalie Antti Raanta were traded to Arizona for defenceman Anthony DeAngelo and a first-round draft pick the Rangers used to select centre Lias Andersson.