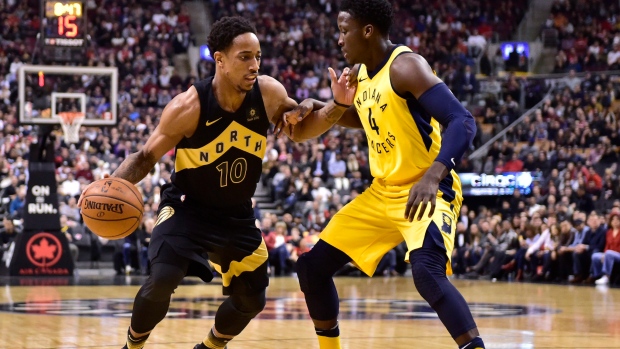 TORONTO — The celebratory Atlantic Division T-shirts were draped neatly over each player's chair in the post-game locker-room.

The Toronto Raptors barely glanced at them.

On an historic night they clinched the No. 1 seed in the Eastern Conference, won the division title, and set a franchise record for regular-season wins, there was no celebrating. The Raptors were only looking forward.

"Journey's not over. Next question," Kyle Lowry put it bluntly, on their regular-season accomplishments.

Serge Ibaka scored a season-high 25 points to lift the Raptors to a 92-73 victory over the Indiana Pacers on Friday, Toronto's 57th win of the season, and 33rd at the Air Canada Centre. Both topped the previous franchise highs set in the 2015-16 season.

The Raptors (57-22) have three games left in the regular season before they embark on their fifth consecutive post-season, and coach Dwane Casey said now is not the time for reflection.

"It's gratification but you're not satisfied, that's the way I like to put it," Casey said. "We haven't got to where our ultimate goal is."

Playing in their Drake-inspired black and gold OVO jerseys, the Raptors led from the opening tipoff and, other than a second-quarter blip when they allowed the Pacers to pull within four points, they dominated for most of the night in front of a capacity Air Canada Centre crowd that included Drake.

They pulled away in the third quarter thanks largely to Ibaka, who shot a perfect 5-for-5 — including a pair of three-pointers — that put the Raptors ahead by 27 points. They took a 72-49 lead into the fourth.

The sizable lead allowed Casey to go to his bench for the final frame, giving the starters some much-appreciated rest before the playoffs begin on April 14.

A pair of Robinson threes midway through the fourth pulled the Pacers to within 17, but the visitors couldn't put a significant dent in Toronto's lead. As the clock ticked down the final seconds, the ACC crowd stood and applauded the Raptors' regular-season record.

DeRozan said achieving the No. 1 seed shows "that once you put your mind toward something, work toward a goal, it can be accomplished.

"We did that. Now, we've got another goal that we want to reach as well," DeRozan said. "So this gives us the confidence that we can do it and take it to another level."

The Raptors' magic number on the night was one — either a Toronto win or Boston loss Friday clinched them the No. 1 seed, and home court for the duration of the Eastern Conference playoffs.

The regular season played out in a series of step-by-step goals, DeRozan said, finally culminating in earning the top seed.

"That's one of those goals that you fight for, you strive for," he said. "That's what motivates you, is to get there and understand you took care of business. We've got home court advantage throughout the playoffs so let's use that to our advantage. Little things, step by step, that's how we look at it."

Casey scoffed when questioned about potentially resting players down the regular-season stretch, saying the team is only now rediscovering its rhythm after a handful of poor performances.

"That's bullcrap. If you've been around the last couple of years, you've seen what totally shutting guys down for a few games does to their body," Casey said. "You may rest a guy a few minutes, or whatever a game, but there won't be anybody that's going to be taking the rest of these next few games off, because we're just now these last couple of games have got a sense of rhythm.

A solid defensive effort saw the Raptors hold Indy to 22 per cent shooting in the first quarter and, when Poeltl scored on a reverse layup with less than a minute to go, Toronto went ahead by 17 points. The Raptors took a 26-14 lead into the second quarter.

The Pacers cut Toronto's lead to just four points with a 10-0 run midway through the second, but a three by Lowry capped a mini Raptors run that sent them into halftime up 45-33.

The Raptors host Orlando on Sunday in their last regular-season home game.