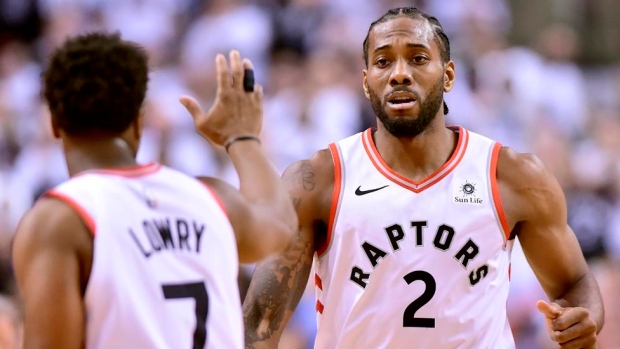 TORONTO — Kyle Lowry remembers witnessing only one other performance that was as dominant as Kawhi Leonard's was on Saturday night.

It was 2009. The Raptors point guard was playing for Houston versus Portland in the first round of the playoffs, and the Rockets' seven-foot-six giant of a centre Yao Ming was scoring virtually at will.

Leonard had that kind of night, scoring a career playoff high 45 points in Toronto's 108-95 win over Philadelphia. He demoralized Sixers' defenders with his clinical precision and creativity, spinning around Jimmy Butler, bouncing off Ben Simmons, knocking down threes.

He made it look easy.

"But I think yesterday wasn't easy for Kawhi, it's not easy," Lowry corrected. "He got to his spots, he made some threes, got to free throw line, his pace was unbelievable. It's not easy."

Leonard's night was one of the most impressive performance by a Raptor ever. Only Vince Carter, who had 50 points against the Sixers in the 2001 playoffs, scored more. In only his first playoff appearance in two years, he looked more like the 2014 Finals MVP than he has in awhile. The quadriceps injury that kept out of all but nine games last season? What injury?

The morning after the Raptors dominant Game 1 win, Lowry was asked how he avoids becoming a spectator at the Kawhi Show.

"You try to just make sure you help him as much as you possibly can," he said. "If that's screening the right way, if that's rolling, if that's calling a play for him, if that's helping him on defence and helping him save some energy, you try to help him and help the team no matter what in any type of situation, whatever you can do, you gotta get out and take his man for a second or screen his man or back cut just to get him open . . . You don't help him by just standing and watching."

While Leonard plus Pascal Siakam, who had a 29-point night, hogged the spotlight on the offensive end, Toronto's defence was on a string. Lowry and Leonard were the motor and Marc Gasol the anchor as the Raptors held one of the league's most potent offences to 39 per cent shooting, and forced 16 turnovers.

"Defensively there seems to be a lot of connectivity out there," coach Nick Nurse said. "I keep saying when Kawhi and Kyle are playing as hard as they can play, everybody that steps on the floor probably is willing to play hard, too."

Nurse said it "helps a lot" that his starting lineup — Leonard, Lowry, Gasol, Siakam and Danny Green — a unique group that because of injuries, trades and Leonard's load management he's only been able to use for these six post-season games, boasts significant experience and basketball IQ.

"It's a very intelligent, very experienced group," the coach said. "You see it not only in the game but you see it on days like today. The film session . . . it's not us just telling them, it's us working together and there's a lot of good ideas. Our coaching staff's ears are open, there's an exchange of ideas because these guys have been through hundreds of games and lots of playoff runs and all those kinds of things."

Gasol, an NBA defensive player of the year winner, held Embiid to 5-for-18 shooting for 16 points.

"We've got some thing we like to do prior to a guy like Embiid getting the ball. Marc does those well, and so do the other guys. So there's a lot of little things that are going on out there before Embiid gets it," Nurse said. "And then after he gets it, we try to provide a little less space maybe than he would like to have. A lot of credit to Marc.

"Still, Serge (Ibaka) goes out there and changes the look, and fights him pretty hard as well, and is quick. It's two tough guys to deal with."

Sixers coach Brett Brown was positively gushing about Toronto's defence after his team's loss on Saturday, saying it's "rare" to see a defence that's so solid across the board.

Nurse paused for a moment when asked about Brown's compliment.

"I hope we can get to 'rare,'" the coach said. "I think we've got the possibility to. I think there's some want-to. I think there are areas to polish and more effort areas. Again, I think a lot of defence is desire and I've said, I think this is a group that wants to and there's still room to grow."

Game 2 is Monday in Toronto, then the series shifts to Philadelphia for Game 3 on Thursday and Game 4 on Sunday.