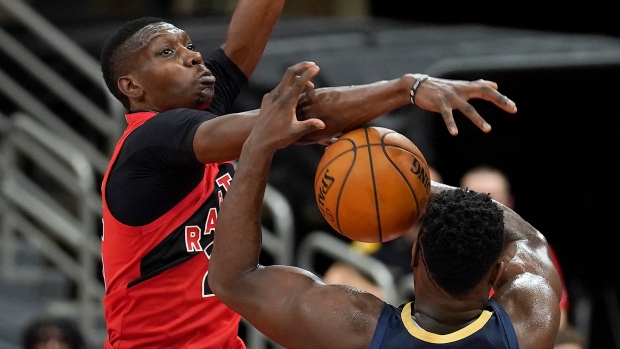 TORONTO – At least the Raptors aren’t having a complete identity crisis. If nothing else, they know who they want to be.

“A champion,” Kyle Lowry said, somewhat facetiously, when that question was posed to him a few days before last week’s season opener. “That’s an easy kind of question.”

“I’m gonna be honest with you,” the all-star point guard elaborated. “I think we should become a real-life defensive monster. That’s what I would like us to become. I don’t want us to be this offensive juggernaut. I want us to a defensive team where every single possession, every single night the team who is coming in knows that it’s going to be a slug-it-out game, [that] they’re going to get hit, they’re going to get beat up, they’re not gonna be roaming free. That’s one thing I would love for us to become.”

It was a reasonable response and remains a seemingly attainable goal. After all, that brand of relentless and innovative defence has been their calling card for the better part of the past two seasons. However, after two games and a couple disappointing losses to begin the new campaign, it’s clear that the Raptors have plenty of work to do if they’re going to get back to that level.

“We’re nowhere near where we want to be defensively,” Lowry admitted following his team’s 119-114 loss in San Antonio on Saturday.

They simply haven’t looked like themselves on that end of the floor. Their switches and defensive rotations haven’t been as crisp, their closeouts haven’t been as hard, and they haven’t seemed nearly as locked in as a unit.

Consider a defensive breakdown late in the first half of Saturday’s game, when Spurs guard Lonnie Walker drove into the middle of the lane and got an uncontested layup while all five Raptors players on the court stood around him and watched. As Walker blew by his man, Pascal Siakam – who committed to going for the steal – Lowry called for somebody to help on him. None of the other three guys – OG Anunoby, Fred VanVleet and Chris Boucher – or Lowry himself, slid in.

The Raptors ranked among the NBA’s top-five in defensive efficiency each of the past two seasons, though they really established themselves as one of the league’s stingiest teams in the 2019 playoffs, en route to winning the championship. Despite the loss of Kawhi Leonard and Danny Green – a couple of elite perimeter stoppers – in free agency that summer, Toronto carried that identity into the 2019-20 campaign, ranking second in defence.

Known for their unrelenting effort, versatility and creative game plans, last season’s team prided itself on a consistent approach. The offence would come and go, but regardless of whether their jumpers were falling or if they were able to generate good looks in the half court – a reoccurring issue for them – on any given night, they could almost always rely on their defence to keep them in games.

It was a credit to Nick Nurse and his coaching staff for designing the schemes that helped neutralize so many of the league’s star players, and to the talent on the floor for being able to execute them. But mostly, their defensive prowess was a product of the team’s exceptionally high basketball intellect.

To pull off what those Raptors teams were able to on the defensive end – switching at such a high frequency and with so much precision, while also adjusting and adapting their coverages on the fly – you need smart players as much as you need talented ones, and they had plenty of both.

With two more of their best and most experienced defenders heading to Los Angeles this past off-season – Marc Gasol and Serge Ibaka – the question was whether their new-look front court could fill the void.

So far, they can’t complain about the production they’ve gotten from the centre position, at least offensively. Aron Baynes has come as advertised and Chris Boucher has been one of the lone bright spots, scoring 22 points to go along with 10 rebounds and seven blocks off the bench against San Antonio.

But if they’ve missed the presence of Gasol and Ibaka anywhere it’s on the defensive end.

Even in what most would consider a down 2019-20 season – and one in which he missed 28 games due to injury – the Raptors allowed 7.7 points fewer per 100 possessions with Gasol on the court than they did without him. The former Defensive Player of the Year is as savvy as they come on that end of the floor. He’s never played above the rim but he’s almost always in the right spot. Ibaka was the perfect complement as one of the league’s top rim protectors.

What they had in common, though, is that they were both among the club’s most vocal players on the court. They were always talking, directing traffic and serving as anchors for the defence. Communication, or a lack thereof, has been mentioned as a cause of the early-season breakdowns.

“Right now that is a short list,” VanVleet said, when asked which players have been the most vocal on defence. “I am not going to give anybody credit for communicating, myself included. We got to do a much better job of that. So to answer your question everybody on the team needs to be better on that end of the floor communicating, starting with myself and I think that will help our defence out. I mean there’s nobody in the building so there’s no excuse to not be talking. It’s as quiet as hell out there.”

You wouldn’t expect any team’s defence to be at its best this early in the season, especially with some notable changes to the top of the roster. It takes some time to get everybody on the same page. But you also wouldn’t expect the Raptors’ defence to be this far away from what it’s been. Even without Gasol and Ibaka, Nurse is still at the helm, Lowry and VanVleet remain as high IQ leaders, and Siakam and Anunoby are two of the most versatile defenders in the game.

Most of the new pieces, or players in expanded roles, should also be able to carry to the torch. Baynes is a physical and experienced defender. What Boucher lacks in strength he should make up for with his length and activity. DeAndre’ Bembry comes in with a strong reputation for his energy, and could help make up for the loss of Rondae Hollis-Jefferson. When he gets his opportunity, and it’ll come, rookie point guard Malachi Flynn – last year’s Mountain West Defensive Player of the Year – should impress on that end of the floor.

Although it’s fair to expect some drop-off from a year ago, the Raptors still have the personnel to be a very good – if not elite – defensive team, but they must get back to making it a nightly priority. It may actually be that simple.

“I think defense always starts with alertness and readiness,” Nurse said ahead of Tuesday’s game in Philadelphia. “We've been caught not being ready a few times. Energy is also kind of next in line on that kinda stuff. There have just been a few too many breakdowns and yeah, it's just probably getting a new group a little more in sync. I think we're moving in the right direction.”

They’ve been the victims of some unfortunate shooting luck, as Nurse went on to point out. Pelicans guards Lonzo Ball and Eric Bledsoe – neither known for their shooting – combined to hit eight of their 16 three-point attempts in last week’s opener, for instance. They’ve gone 5-for-24 since.

But they also know they have to be a lot sharper if they’re going to avoid starting the season 0-3 for the first time since dropping nine games in a row to open the 2005-06 campaign.

They’re not good enough offensively to play as poorly as they have on defence. They know who they want to be. Now, it’s just a matter of rediscovering that identity. ​