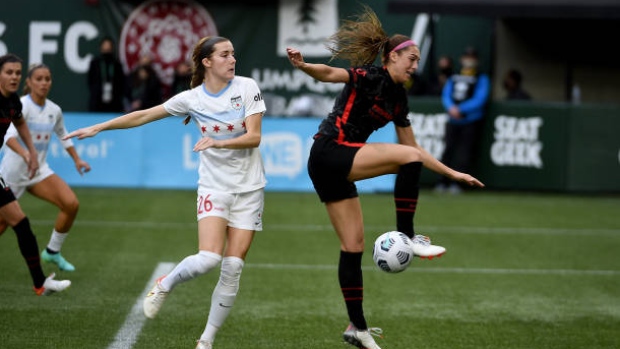 PORTLAND, Ore. (AP) — Katie Johnson and Sarah Woldmoe each scored and the Chicago Red Stars advanced to the National Women's Soccer League championship game with a 2-0 semifinal victory over the Portland Thorns on Sunday.

Chicago will play the Washington Spirit for the title Saturday in Louisville, Kentucky. The Spirit beat OL Reign 2-1 earlier Sunday.

The Thorns won the NWSL Shield this season for best regular-season record. They have won the NWSL championship twice, in the league's inaugural season in 2013 and again in 2017.

The Thorns were without midfielder Lindsey Horan because of an eye injury. She released a statement just before the game that said she took a knock in practice on Saturday and lost vision for a few hours.

The Thorns were also without midfielder Crystal Dunn, who announced this week that she is pregnant and due in the spring.

The Red Stars were without Mallory Pugh because of coronavirus protocol.

Chicago was hurt in the 23rd minute when attacker Kealia Watt injured her right knee and had to leave the game.

Watt's replacement, Katie Johnson, scored in the 37th minute to give the Red Stars the lead. Thorns goalkeeper Bella Bixby leaped but couldn't deflect the shot from distance to the near post.

The Red Stars doubled the lead in the 59th minute on Sarah Woldmoe's goal.

Bixby collapsed to the field after the loss in tears, and was helped off by her teammates. The game was the last for Thorns coach Mark Parsons, who is leaving to coach the Netherlands women's national team full time.

Following the game, Bixby went to Twitter to reveal that she had lost her father earlier this week.

“I don’t feel like I owe anyone an explanation, but I do feel like I’m ready to say it. My father died this week by suicide. And I’ve surprised myself by how strong I’ve been, but I couldn’t hold it anymore. My playing for this city meant so much to him,” she wrote. “I think regardless of the outcome tonight, I would’ve broke down— you can only hold it in for so long. Thank you, rose city, for the unconditional support this year. It was a good one.”

The two teams also met in the 2019 semifinals, with the Red Stars advancing to the title game on a 1-0 victory.