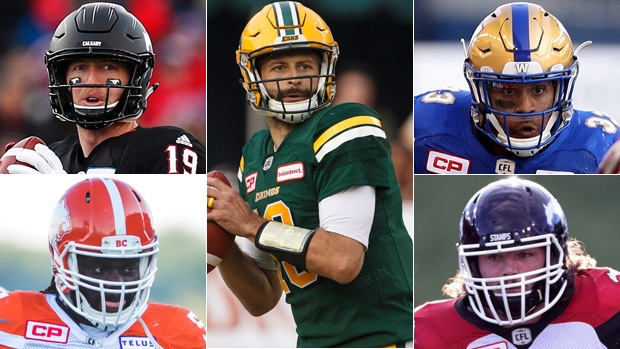 Reilly, who was No. 1 in the 2016 Top 50 Players rankings, returned to the top of the list after being named the CFL’s Most Outstanding Player last season and leading the league in passing yards (5,830) and touchdowns (30).

The Top 50 Players were compiled using votes from media members across the league as well as our TSN CFL commentators.

Last year’s No. 1, Bo Levi Mitchell, fell just one spot to the No. 2 ranking this year after leading the Calgary Stampeders to their second straight Grey Cup Final. Mitchell finished third in the league in passing with 4,700 yards and 23 touchdowns, but his record in Grey Cups fell to below .500.

Winnipeg Blue Bombers running back Andrew Harris is the highest-ranked Canadian on the list, coming in at No. 3. Harris led the league in offensive yards last season, finishing with 1,035 rushing yards and 857 receiving yards. The Winnipeg native was just 143 receiving yards away from becoming the first CFL player ever to record 1,000 rushing yards and 1,000 receiving yards in the same season, an accomplishment he has his sights set on for 2018.

Two linebackers round out the Top 5 in the BC Lions’ Solomon Elimimian and the Calgary Stampeders’ Alex Singleton. Elimimian broke his own single-season record for tackles last year with 144, while Singleton finished second in the category with 123 and was named the league’s Most Outstanding Defensive Player.

Grey Cup champion Ricky Ray was the third ranked quarterback on the list, coming in at No. 6 after being ranked No. 27 a year ago.

Ottawa Redblacks slotback Greg Ellingson was the highest-rated receiver, finishing No. 7 in the rankings and narrowly edging out Duron Carter of the Saskatchewan Roughriders, who finished No. 8 on the list.

Diontae Spencer (No. 24) and Chris Rainey (No. 41) made the list in part due to their special teams work, while Justin Medlock was the lone kicker included in the rankings, finishing at No. 42.

Toronto Argonauts running back and the league’s Most Outstanding Rookie for 2017 James Wilder was the second-highest rated newcomer to the list, ranked just one spot behind Jefferson at No. 11.

The Blue Bombers lead the way with nine players on the Top 50 list, followed by the Roughriders with eight. The Redblacks and Hamilton Tiger-Cats have seven players on the list each while the Argonauts have six. The Eskimos, Stampeders, and Lions have four players each on the list while the Montreal Alouettes finished with just one, free-agent signing Tommie Campbell.