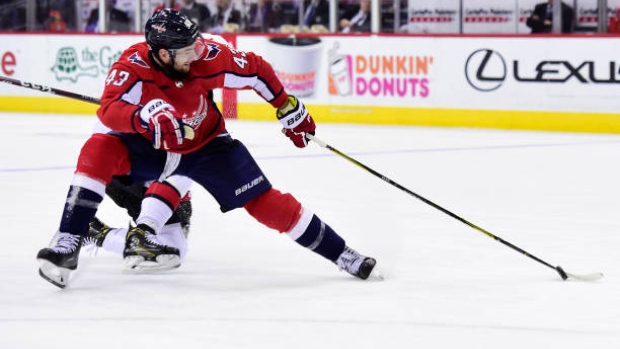 According to Isabelle Khurshudyan of the Washington Post, the NHL Department of Player Safety could not tell if Wennberg's head was the principal point of contract on the hit due to a lack of camera angles.

Wilson received a minor charging penalty, while Wennerberg did not return to Game 1 and is considered doubtful for Game 2.

“The hit on Wennberg for me is a dangerous hit,” Blue Jackets general manager Jarmo Kekalainen said Friday morning while updating Wennerberg's status.

Wilson, who has a suspension history, regretted the hit for putting the Blue Jackets on a key power play.

“I’m just trying to finish my check there,” Wilson said to the Washington Post. “I’m obviously not trying to take a penalty. That cost us the game. That’s a critical moment. I’ve got to be better and maybe pass up on that hit. We’ve got the lead there so maybe a big hit is not needed. It’s playoffs. Trying to finish your checks, and unfortunately I took a penalty. They capitalized on a couple of their opportunities there in the third period.”

Khurshudyan reports Blue Jackets forward Josh Anderson is also expected to avoid a suspension for his hit from behind on Capitals defenceman Michal Kempny.

"I’m going to let the league look at it,” Trotz said. “I thought there’s clearly [Kempny’s] numbers there [when Anderson hits him]. I’ll just put in the league’s hand, but we lost a player early in the game. You know, it was the right call on the ice. I know the league will look at it. I mean, [the NHL is] trying to get that out of the game.”