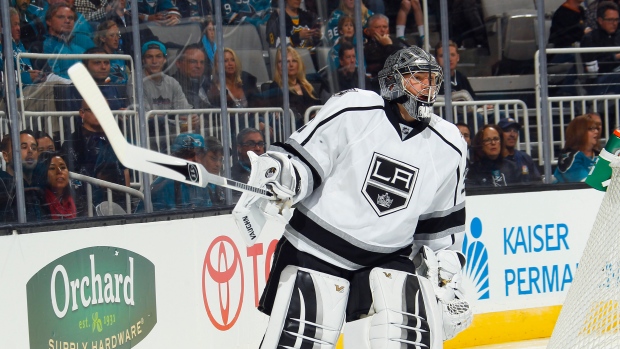 Los Angeles Kings general manager Dean Lombardi says star goalie Jonathan Quick will be out for "about three months" with the lower-body injury he suffered in the season opener, according to Lisa Dillman of the Los Angeles Times.

Also asked if Jonathan Quick would go on long tern IR and the answer was not now.

The 30-year-old American was pulled after the first period during the Kings' opener against the San Jose Sharks on Oct. 12. He appeared to hurt himself while stretching to make a save on Sharks forward Joe Pavelski.

The initial diagnosis by the team was "week-to-week." Quick will not need surgery.

Jeff Zatkoff, who signed with the Kings this summer after spending three seasons with the Pittsburgh Penguins, is 0-3 with a 4.37 GAA and a .839 SV this season. LA originally selected him in the third round of the 2006 draft.