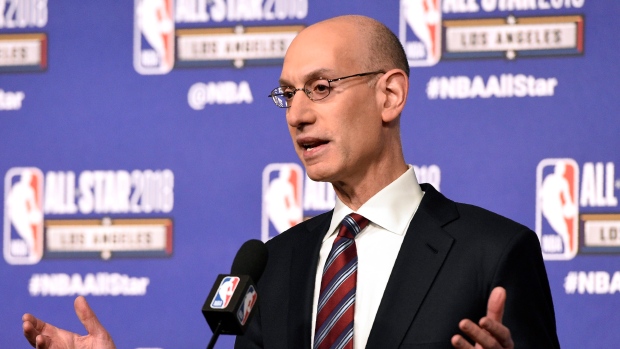 NBA players might be getting back in the gym sooner rather than later.

Beginning on May 1, the NBA is allowing teams to open their practice facilities to players in cities and states where local governments have eased stay-at-home orders, according to ESPN's Adrian Wojnarowski.

Beginning on May 1, the NBA is allowing teams to open their practice facilities to players in cities and states where local governments have eased stay-at-home orders, sources tell ESPN.

Group practices would not be allowed yet, and teams will not yet be permitted to organize in-person workouts.

One team that will not be opening up their practice facilities on May 1 is the Toronto Raptors, according to TSN's Rick Westhead.

Westhead says that the Ontario ban of all gatherings more than five people is through May 6, with no exceptions for sports.

Even individual player workouts at MLSE facilities are banned, spokeswoman tells me, since all Ontario facilities providing indoor recreation programs ordered closed as per Mar 17 "Closure of Establishments" emergency order.

But as certain states and municipalities began loosening restrictions on personal movement, the NBA decided it was time to let players return to their practice courts — if only on a limited basis. Georgia and Oklahoma are among the states that have allowed some businesses to reopen and some cities in Florida are expected to loosen their stay-at-home policies in the coming days, even though health officials are warning that such moves are being made too quickly.

For those teams in cities where stay-at-home orders still make such a return impossible, the NBA said it would work to find “alternative arrangements,” the person with knowledge of the matter said.

This move does not mean that a resumption of games is imminent. Still, the decision to let teams back into facilities is a significant step.

In the NHL, suspended at about the same point of the season as the NBA, Deputy Commissioner Bill Daly said league officials “haven’t made any decisions yet.” Daly said only the NHL owes players and teams guidance before April 30 and will consider its next steps in that context.

If they’re so inclined, that can now change. There remains no indicator about when a full-fledged return to organized team workouts will resume, however.

NBA Commissioner Adam Silver has said on several occasions that the league does not anticipate being able to decide until sometime in May — at the earliest — if a resumption of the season is possible.

The NBA suspended the season March 11. It ordered teams to shutter their facilities eight days later, saying at the time it was doing so “in light of the rapidly-developing coronavirus situation, and consistent with evolving advice from health experts regarding how to promote individual and public health while minimizing the spread of the virus.”

Johns Hopkins University, which tracks the numbers of those affected or killed by the virus based off official government figures, said the COVID-19 worldwide death toll surpassed 200,000 on Saturday. And the World Health Organization said “there is currently no evidence” that people who have recovered from the virus cannot fall sick again.