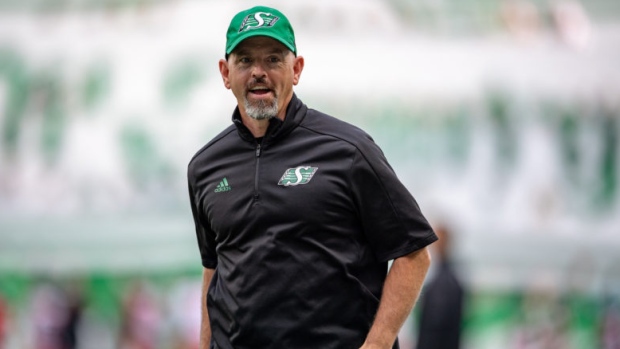 REGINA — Jeremy O'Day didn't have to look far to find a new head coach for the Saskatchewan Roughriders and ensure an easy transition with free agency starting in just over two weeks.

Dickenson said he told O'Day, the club's new GM and vice-president of football operations, the opportunity came at the right time.

"This was the perfect job at the perfect time with the perfect people and I couldn't feel any better about who I'm going to work with," said Dickenson, who becomes the 47th head coach in club history.

He replaces Chris Jones, who resigned as Saskatchewan's head coach/GM to join the NFL's Cleveland Browns earlier this month.

Due to a league-mandated football operations salary cap, Saskatchewan was handcuffed in retaining 80 per cent of its staff who are on one-year deals.

O'Day said having most of his coaches under contract didn't affect any candidates wanting to be the team's head coach.

"That was just something that was just part of the picture, but I can tell you that it didn't hinder anyone from wanting to be a coach here or change my opinion at all," O'Day said.

Dickenson, 47, is a veteran CFL coach, having spent time with Calgary (twice), Montreal, Saskatchewan (twice), Winnipeg and Edmonton. The 2019 season will mark Dickenson's 17th campaign in the CFL.

He will also remain as the special teams co-ordinator, but will have to look for a new defensive co-ordinator to replace Jones.

Dickenson said he can take his time on hiring a defensive co-ordinator and feels as though the Roughriders already have a good core group of coaches.

O'Day said there was a lot of interest in the position and he looked both inside and outside the CFL for candidates.

Dickenson, a first-time CFL head coach, takes over a team that went 12-6 in the regular season last year before being knocked out in the West Division semifinal by Winnipeg.

He will potentially be seeking a new quarterback as starter Zach Collaros and backup Brandon Bridge are scheduled to become free agents.

Dickenson said not inheriting a quarterback didn't impact his decision to take the head coaching role as many other teams are in the same situation.

"We need a good quarterback," he said. "We feel confident in some of the quarterbacks we have, we don't want to discount that.

"There's some good free agents out there and in the next few days we'll start to narrow that list to try and get one."

The hiring was met with positivity on Twitter by Saskatchewan defensive lineman Jordan Reaves, who congratulated Dickenson.

"I have nothing but respect for him and can't wait to go to war for him," the tweet said.

Dickenson said being a head coach was never a career goal of his, but is a role he evolved into over the years.

He will enter his fourth season of his second go-round with the Roughriders after spending the last three years as the special teams co-ordinator. He also worked with the Riders special teams during the 2011 and 2012 seasons.

Being special teams co-ordinator prepared him well for the head coach opening, Dickenson said, as he deals with the entire team on a daily basis in both roles. He thinks it will make for an easy transition.

He said it's going to be fun facing his brother, who he said was supportive during the Riders' hiring process.