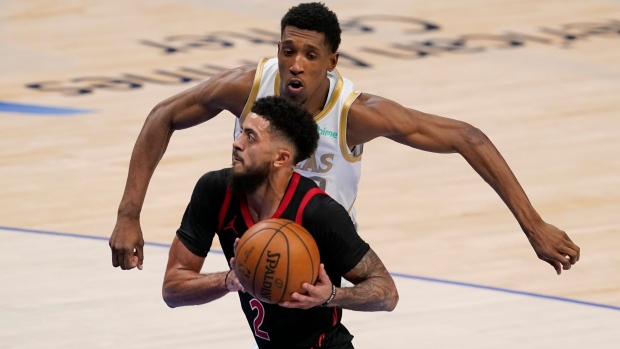 Jalen Harris is heading back to Toronto.

The Raptors' 2020 draft pick has signed with the Scarborough Shooting Stars of the Canadian Elite Basketball League, the team announced on Tuesday.

Former Raptors 2nd-rounder Jalen Harris has signed with the Scarborough Shooting Stars of the CEBL.

After serving his suspension for violating the NBA's Anti-Drug program, Harris is eligible to be reinstated by the league for next season and the Raptors still own his rights.

On July 1, 2021, Harris was dismissed and disqualified for a year by the NBA for a violation of the league's anti-drug program. He is eligible to apply for reinstatement on July 1. Should he be successful, the Raptors would retain his rights.

The Dallas native subsequently signed with Vanoli Cremona of the Italian Lega Basket Serie A.

Harris becomes the second major addition to the Shooting Stars' backcourt over the past week, having previously announced the signing of guard Jermaine "J. Cole" Cole.

The team's season opens on May 26 against the Guelph Nighthawks.