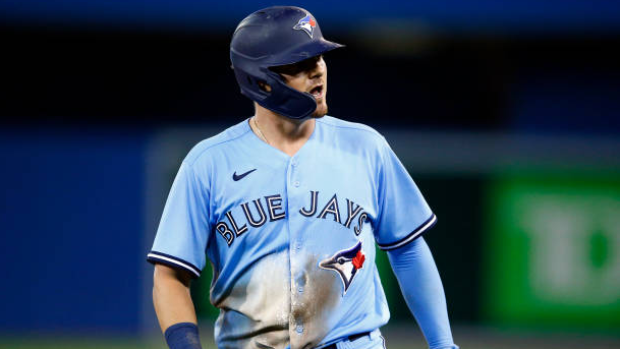 TORONTO — Swapping catchers with the Chicago White Sox on Sunday evening was about one thing for GM Ross Atkins and his Toronto Blue Jays: flexibility.

Reese McGuire, a left-handed hitting catcher and the 14th-overall pick in the 2013 draft, was out of options and, like last year, could not be sent back to Triple-A without being exposed to waivers.

Zack Collins, a left-handed hitting catcher and the 10th-overall pick in the 2016 draft, has one option remaining, giving the Jays some roster flexibility, especially down the road when rosters shrink from 28 players back to 26 on May 1.

McGuire is a defence-first backstop and was the best receiver and catch-and-throw option the Jays had behind the plate.

On the other hand, Collins was credited with a not-so-flattering minus-18 Defensive Runs Saved mark in 73 games behind the dish last season with the White Sox.

Collins is minus-22 in his brief career, while McGuire has posted a plus-4 DRS.

Despite so-so numbers across his first 351 plate appearances, Collins was seen as a potential high-OBP power bat on his way up through the minor leagues, but he’s scuffled at the major-league level thus far.

The move allows the Jays to roll with Danny Jansen and Alejandro Kirk behind the plate as the club awaits the arrival of top prospect Gabriel Moreno.

In an ideal world, that would happen in June or July after Moreno spends some much-needed time at Triple-A Buffalo to begin the year.

Until then, Collins could stay with the Jays as an emergency catcher and lefty bat off the bench — he’s also dabbled at first base — or they could find another way to use that roster spot over the next few days.

Keeping Collins around would allow manager Charlie Montoyo to use Kirk at DH with a little bit more confidence, but the idea of losing the DH spot late in a game — if Jansen got hurt and Kirk had to shift from DH to catcher they’d lose the DH, and the pitcher would have to hit — is a bit overblown as long as the bench is deep enough.

The Jays are hoping to maximize Kirk and Jansen this season, and they’ve spent a long winter thinking a lot about it, according to bench coach John Schneider, a former catcher.

“It’s trying to use their strengths as much as you can whether it’s offensively or defensively and, I think, that’s something we’re going to do a little bit more of this year, trying to create the best version of themselves behind the plate but also tying that into making the pitcher the best version of himself,” Schneider explained.

“If it’s an area of the plate where a catcher is really good receiving, try to match up a pitcher who’s going to throw the ball in that area a little more. Using all the numbers that we have and putting those guys in the situations where they can have success.”

The club’s minor league assignments are starting to reveal themselves ahead of Triple-A opening day for the Buffalo Bisons at home on Tuesday, followed by the Double-A New Hampshire Fisher Cats getting going on the road in Portland on Friday.

While we all knew the No. 1 prospect in the system, Moreno, was headed to Triple-A, the Fisher Cats’ faithful will have the pleasure of watching Orelvis Martinez open his age-20 season, according to sources.

Martinez’s assignment was the most interesting in the org this spring.

As I wrote in January in my top 50 prospects list, there were reasons why, plus he finished hot.

The decision came down to sending him back to dominate that level before a quick promotion, or challenge him immediately at Double-A?

After a confidence-building spring showing that included recognizing breaking stuff a little bit better and a couple of impressive home runs, the Jays decided upon the latter.

Martinez seems to be one of those prospects who can rise to the level of competition, despite the inexperience.

Keeping the strikeouts in check and cutting down on chasing breaking balls out of the zone are the things to keep an on with Martinez, who is expected to see time at third base, shortstop and second base this summer.

Another interesting name joining Martinez at Double-A, according to a source, is 2021 sixth-round pick Hayden Juenger, who seems to be on the fast track towards a big-league bullpen role of some sort.

In the 6-foot, 180-pound right-hander’s debut at High-A after being drafted last year, he struck out 34 batters and walked just four across 20 innings.

The system’s No. 31 prospect could be an interesting bulk role arm for the Jays as early as this summer if the stuff looks like it did last year.

Adrian Hernandez, another interesting reliever, will also start in the Double-A bullpen.

Losing David Phelps last May to a ruptured lat muscle quietly had a huge negative impact on the Blue Jays bullpen.

Over the next month, the pen struggled, and the front office eventually had to go out and trade for Trevor Richards and Adam Cimber.

A year later, the 35-year-old is once again hoping to get back to being one of Montoyo’s most-trusted late inning options.

On Friday, Phelps officially made the club — he had an opt-out decision due — and he was added to the 40-man roster, which currently sits at 39.

Phelps feels good about where he’s at, sitting around 92 mph in bullpen sessions.

“I’ve been happy with where my stuff’s been,” Phelps said. “The feedback has been, ‘You look like yourself.’”

The reason he chose to return to the Jays is simple.

“It’s the people,” Phelps said. “The relationships I’ve built with not only the coaching staff but the players in the room, I feel like there’s not only been a lot invested in my part in people but vice versa, as well. I feel like a lot of people here have invested in me.

“If I’m healthy, which I am right now, I’ve proven to Charlie that I can be trusted, and I can get outs.”