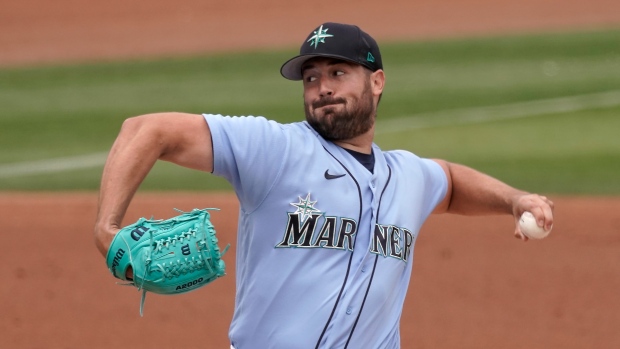 There will be no return to Toronto for Robbie Ray this season.

Seattle Mariners manager Scott Servais confirmed that the 2021 American League Cy Young winner did not accompany the team for their three-game set with the Blue Jays starting on Monday.

Robbie Ray is not with the team in Canada, per Scott Servais … Ray will start Friday’s game in Boston.

Ray wasn't scheduled to pitch in Toronto after starting and picking up the win in the Mariners' 8-7 win over the New York Mets on Sunday.

Ray, who spent the past two seasons with the Jays, signed a five-year, $115 million deal with the M's in the offseason.

While the 30-year-old Ray isn't with the team, he wasn't placed on the restricted list on Monday ahead of the series. Reliever Drew Steckenrider was placed on the list and pitcher Roenis Elias was recalled from Triple-A Tacoma in a corresponding move.

Ray is next set to take the hill on Friday against the Boston Red Sox.