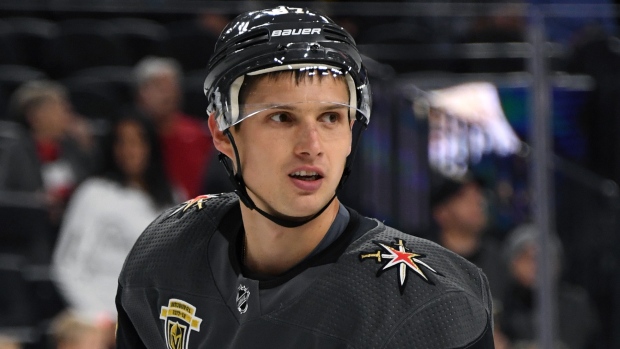 Vadim Shipachyov is officially done in the NHL according to TSN Hockey insider Pierre LeBrun after the 30-year-old’s voluntary retirement paperwork was completed.

to be clear: NHLPA and NHL lawyers have signed off on it; still needs signature from Vegas Golden Knights as well

The Golden Knights have just signed off on it.

The NHL, NHLPA and Vegas Golden Knights all signed off on the paperwork Thursday afternoon.

It ends a painful saga between Shipachyov and the Golden Knights. He signed a two-year, $9 million deal but was sent down to the AHL’s Chicago Wolves to open the season. He was later called up to the NHL club amid injuries but played only limited minutes, scoring one goal in three games before he was sent down to the the AHL for the second time.

He returned to Russia on Oct. 29 and was subsequently suspended by the Golden Knights. Vegas allowed Shipachyov’s agent to shop the Russian forward to try and find an NHL trade partner, but no such deal was found.

General manager George McPhee said that Vegas had a deal in place with an NHL team, but the forward elected to return to Russia according to Gary Lawless of the Golden Knights.

McPhee had a trade in place which would have sent Shipachyov to another NHL team. He elected not to report.

As part of his retirement, Shipachyov had to repay his $2 million signing bonus from the team, minus the prorated amount for his time served with the team this season.

During his tenure with the NHL's newest franchise, he appeared in three regular season games, scoring one goal.