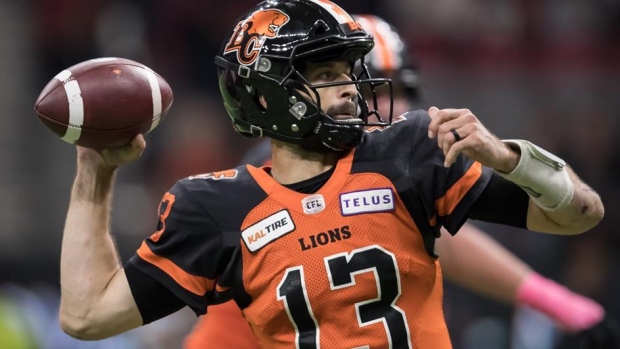 TORONTO — B.C. Lions quarterback Mike Reilly has filed a grievance against the CFL team reportedly over the non-payment of guaranteed money.

TSN's Farhan Lalji reported the two sides are looking at a potential settlement before the grievance goes to arbitration, which wouldn't happen until the new year. Lalji added that it appears the documentation around the guarantee was not filed with the Canadian Football League and neither David Braley nor Lions team president Rick LeLacheur were aware of it.

According to league sources #BCLions president Rick Lelacheur was also unaware of the guaranteed portion of Reilly’s agreement. It is believed this situation led to Ed Hervey’s departure from the club. @TSN_Sports @TSN1040 @CFLonTSN @CFL https://t.co/tz9kZeOpWs

A CFL source confirmed Monday the grievance had been filed. The source spoke on the condition of anonymity as the league, Lions and CFL Players' Association have all not publicly divulged specific details.

Reilly signed a four-year, $2.9-million deal with B.C. as a free agent in February 2019 following six seasons with the Edmonton Eskimos. It was a homecoming of sorts for Reilly, a native of Kennewick, Wash., who began his CFL career with the Lions (2010-12).

Reilly's deal with B.C. was significant as it made him the CFL's highest-paid player but it also reportedly included $250,000 being fully guaranteed. When the league cancelled the 2020 season due to the COVID-19 pandemic, the source said Reilly was still expecting to receive his guaranteed stipend and the grievance was filed last month because he'd not received it as of then.

Ed Hervey, who signed Reilly to the four-year deal in 2019, resigned as Lions GM on Oct. 16, citing personal reasons. Just 10 days later, franchise owner David Braley passed away at the age of 79.

Reilly, 35, was the CFL's outstanding player in 2017 after passing for a career-high 5,830 yards and 30 touchdowns. He guided Edmonton to a Grey Cup title in 2015, earning game MVP honours.