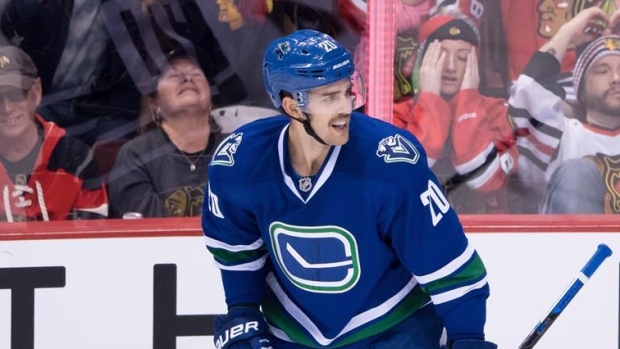 Acquired by the Vancouver Canucks in a trade with the Pittsburgh Penguins in July 2015, the forward was limited to just 20 games with his new team because of injury.

Sutter's issues began with a sports hernia that required surgery and kept him out from mid-November until the end of January, and a broken jaw that ended his year just four games into his return.

The run of bad luck seems to have ended. Sutter is set to suit up for the 20th time this season when Vancouver opens a three-game road trip in Arizona on Wednesday, and the 27-year-old is thankful he's finally getting a chance to show what he can offer on a nightly basis after some dark times.

"It's nice just to be part of it again," Sutter said after practice Monday. "The hardest thing when you're out is you feel like you're kind of on your own team. It's hard. It's nice to be around the guys every day and have a normal routine.

"That's when you start to find your game a little bit."

Sutter has found his stride over the last week, especially on the scoresheet. He has 11 points on the season, and has scored in four straight games while playing as a winger on the top line with Henrik and Daniel Sedin.

"He's really raised the level of his game," said Vancouver head coach Willie Desjardins. "You can tell when guys are pushing hard. He's playing hard at both ends of the rink."

A natural centre, Sutter took the place of Loui Eriksson, who signed a big-money free-agent deal with the Canucks this summer, alongside the Sedins and has led all Vancouver forwards in ice time the last two outings — a 3-2 overtime victory against the Coyotes at home on Thursday and a 4-3 overtime loss to Chicago on Saturday.

"Playing with Hank and Danny, they're pretty smart guys out there," said Sutter, who inked a five-year contract extension after the trade with Pittsburgh. "They're pretty easy to read off of. It seems like we've been able to open up some space for ourselves."

The Canucks experimented with Sutter on the wing with the Sedins last season, but his health and a need for more depth down the middle when he was in the lineup meant they didn't see a ton of action together.

"It's great to be on the ice with him," said Henrik Sedin, who assisted on Sutter's goal against the Blackhawks. "He has a good shot. He's sneaky fast. He doesn't look fast out there, but he can beat guys wide. He's been really good for us."

And while the Canucks were encouraged by the first two periods and the overtime session versus Chicago, they were still left picking up the pieces after blowing a 3-0 third-period lead.

Vancouver (7-10-2) scored a power-play goal in consecutive games for just the second time all year and actually held the lead going into the first intermission, something the team had failed to accomplish through the season's first 18 contests.

"We easily still could have won that game," said Sutter, who has five goals and six assists. "Any time you get a 3-0 lead you want to make sure you capitalize and finish the game, but we took a lot of positives the way we played.

Vancouver finished its recent four-game homestand 2-1-1 and has alternated wins and losses over its last six following an ugly 0-8-1 slide that erased the good feeling from a perfect 4-0-0 start.

After visiting the Coyotes on Wednesday, the Canucks head to Dallas and Colorado for back-to-back games Friday and Saturday looking to improve on a 1-6-1 road mark.

"It's not much that needs to change," said Henrik Sedin. "We've been close in a lot of games. I think we're on the right track, we're playing better now overall. We've just got to keep doing that."