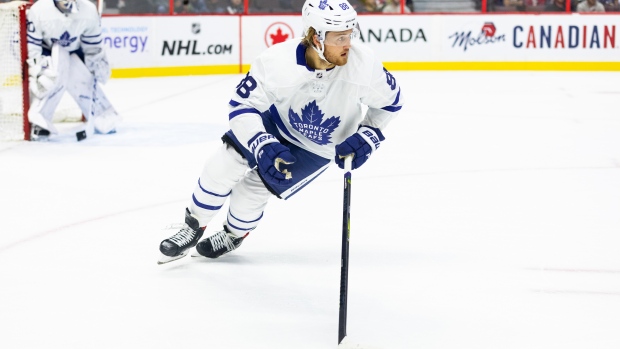 TSN Toronto reporter Mark Masters checks in daily with news and notes on the Maple Leafs, who ska​ted in two groups on Friday at the Ford Performance Centre.

Mitch Marner recalls a conversation he had with William Nylander at the end of last season.

“I remember talking to him about going to Worlds and how he wanted to go over there and get his confidence back,” Marner said, “and you saw how he went over there and he looked like he was flying.”

Nylander racked up 18 points in eight games to lead the tournament in scoring and he’s carried the momentum into Toronto’s training camp.

“He's just confident,” said linemate Auston Matthews. “I think that's just the benefit of having a good summer and going into the season with nothing floating at the top of your head so he looks good. He's flying out there.”

“I just feel like he's seeing it right away,” observed linemate Andreas Johnsson. “You can see mentally that every time he’s on the ice he goes full speed.”

Nylander scored just eight times in 61 games last season and never got on track after a contract stalemate wiped out training camp and the first two months of the regular season.

“I had a great summer,” Nylander said, “and everything's done and settled and now you just go out and play hockey.”

Kasperi Kapanen sees a hunger in his friend's eyes.

"Very motivated," said Kapanen. "I think he wants to prove everybody wrong. I know people were giving him a tough time over the summer, but he's got a new number and a fresh start so he’s looking really good."

And now we get to truly see what the 23-year-old can do. Expectations are high.

"He's going to go down as one of the better Swedish players to ever play, in my opinion," Kapanen said.

"That’s pretty nice coming from a Finnish guy," Nylander said with a laugh.

“I mean, he's got it all," Kapanen explained. "He's got a great shot. He's got great vision. He’s so calm with the puck, like, even if he's made a couple mistakes in the game he's still going to hold on to it and try and make a play, so his confidence level is up there.”

​“It’s just always been like that,” said Nylander, the son of long-time NHLer Michael Nylander. “I feel like that’s something I had since I started playing hockey.”​​

That ability to keep the puck on a string is what makes Nylander so special. It's why his teammates are confident he'll produce a bounce-back season.

“I've been playing against him (since) I was younger and I see to this day that this has been his strongest side,” said Johnsson, “to carry the puck and, whatever he does with it, it's always on his tape and he never loses his balance, even if the puck wobbles he has such control ... I just feel like he’s getting better and better all the time so I definitely (can) see him atop the Swedish players.”

Kapanen mentioned the number change. Nylander has opted to trade No. 29 for No. 88, which he wore when he made his professional debut in the Swedish League. He insists the switch is just a fun thing and not symbolic of a reset.

Although it's worth noting that the No. 88 he admired growing up was another NHL winger with a lot of swagger.

“Patrick Kane was one of the guys I liked, that's for sure,” Nylander said with a smile.

During Wednesday's game in Ottawa, Scott Sabourin, a 27-year-old career minor leaguer attending Senators camp on a professional tryout, was doing his best to make an impression. He dumped Morgan Rielly from behind and made a late, high hit on Johnsson, leading to a fight with Ben Harpur.

Midway through the third period, Sabourin gave Matthews a couple subtle shots after the whistle. The 22-year-old centre proceeded to make a show of trying to peer around Sabourin to check out his nameplate.

“I was laughing,” said Marner, who wasn't watching the game closely back in Toronto, but saw that the video went viral on social media. “I sent it to him and said, ‘This is unbelievable,’ and I was laughing pretty hard at it.”

“We were just messing around,” Matthews said. “He gave me a couple cross-checks after the whistle and, I mean, it was nothing. It was all harmless. We were both messing around and both got a good chuckle out of it and, obviously, it kind of blew up there. It seemed to be a lot of click bait for you guys.”

It was a fun moment, but Johnsson wasn't laughing when asked about Sabourin.

“That guy slew-footed Mo before and hit me in the head,” Johnsson said. “Obviously, you’re going to play hard, but I feel like in the game you have to have respect for other players and I feel like that guy didn't have respect at all. So, I don't feel like we should give him any attention at all, that guy.”

“I thought Harps did a good job with that, didn’t you?” is all the coach would say.

So, let's focus on Matthews.

“When he gets mad, he gets mad,” said Marner. “He's a pretty big guy, can handle himself out there. He didn't act mad at all, he didn't grab the guy at all so I don’t think he was too mad. I think he was doing that for fun, trying to get in people's head.”

Apparently, No. 34 can be just as ruthless with teammates.

“He doesn’t really chirp much,” said Kapanen, “but when he gets upset he'll certainly say something. He's chirped me a bunch before, so he’s pretty good at it.”

“Kappy? That’s just too easy with him," said Matthews, who insisted he doesn't workshop any material during the summer.

“I'm trying to build a thicker skin,” said Kapanen, “but some days are harder than others.”

Michal Neuvirth missed the first two preseason games due to an undisclosed injury, but practised on Friday and expects to play two periods on Saturday in Buffalo.

“It's obviously tough missing a couple practices, but it is what it is. I tried to stay positive and focus on myself and my body,” Neuvirth said in his first Toronto media session since agreeing to a pro tryout with the Leafs. “It was really cold in St. John’s, especially at the practice rinks there, and the staff decided they would give me a couple days in the gym.”

Neuvirth had offers from other teams, but he cheered for the Leafs growing up (Mats Sundin was his favourite player) so when general manager Kyle Dubas called it was a no-brainer.

“I was following my heart with the decision,” said Neuvirth. “It’s a huge opportunity, such a great team here, best organization in the NHL. The staff, the gym, the medicals are the best I've seen and they take care of me pretty good. It’s a huge honour for me to be here and battle for the spot.”

Neuvirth is competing with Michael Hutchinson for the backup job.

The battle for third-pairing jobs on Toronto's blueline is wide open and Rasmus Sandin, the youngest contender for a job, has made a strong early impression.

“He's smart,” said Babcock of the organization's first-round pick (29th overall) in 2018. “He knows how to play, he's got a feel. He's one of these guys that it doesn’t seem to matter how old he is because his hockey sense is so good. He's a little guy who seems to know how to defend. He seems to know how to leverage his body. He just seems to be a good player.

“And the other thing about it is when you talk to him he doesn’t seem to get all uptight, he’s just, ‘Oh, okay, yeah,’ or knows what you’re going to say before you say it most of the time.”

The teenager registered on Matthews' radar during his first camp with the Leafs.

“I was really impressed with him last year, honestly,” said Matthews. “I mean, he can skate, he sees the ice (well), he just seems to slow the game down and make the right plays.”

Sandin, who played for the Soo Greyhounds in the OHL during his draft year, didn't look out of place in his first year of professional hockey. In fact, he excelled in the AHL, posting 28 points in 44 games and seeing his playing time increase throughout the year.

“He had a year down with the Marlies and he just seems to have even more confidence coming into this season,” said Matthews, “and I thought he played really well the other night. It’s fun getting out there with a guy like him, because he can see the ice, he jumps in and is smart about when he jumps in on offence and when he doesn’t, and obviously breaking out of our end he sees it and he makes plays that not many people can.”

After lining up on the right in Ottawa, Sandin will shift back to his natural left side on a pairing with Martin Marincin tonight against the Sabres.

Jason Spezza skated as the right winger on a line with centre Frederik Gauthier and Trevor Moore today at practice.

“I just said to them, I don’t know who is playing centre,” Babcock revealed, “I’ll change it out every day on the sheet," Babcock explained. “If it’s a right-hand faceoff, Spez you got it; left-hand faceoff, Goat you got it. Goat’s down first, play down low; Spez you’re down first, play down low. Let’s see if we can get something going here to create something that could really help our team.”

TSN’s Kristen Shilton has more on Spezza, Gauthier and the battle to be Toronto's fourth-line centre here.

This group is playing tonight against Buffalo

This group is playing tomorrow at Buffalo