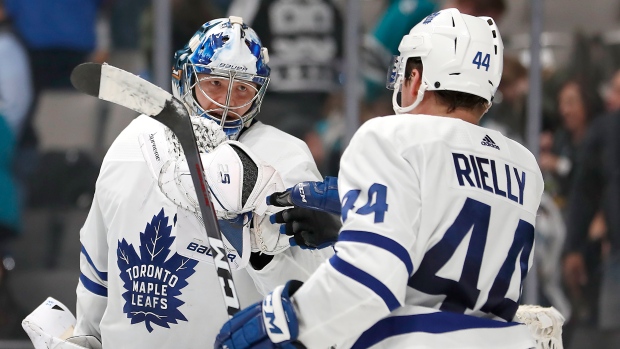 At the one-quarter mark of the 2018-19 NHL season, the Toronto Maple Leafs remain one of the league’s elite teams.

Despite missing injured star centre Auston Matthews, the young and restless Leafs are deep, deep, deep: Mitch Marner is fifth in league scoring with 26 points; blueliner Morgan Rielly has nine goals and 16 assists to sit in eighth in NHL scoring; prized off-season acquisition John Tavares has 23 points, including 12 goals, to hold down 16th spot in the scoring race; and Frederik Andersen leads the league in wins (11), has a stellar save percentage (.934) and an impressive goals-against average (2.08).

Toronto is playing like a Stanley Cup contender and Mike Babcock’s charges are on track to top their franchise-best regular season from a year ago when they recorded 49 wins and 105 points. The Leafs, who swept their three-game West Coast road trip last week and were ranked first in our third 7-Eleven Power Rankings of the season, move up five places to No. 1 this week, according to consensus rankings formulated by the TSN Power Ranking panel of Ray Ferraro, Jeff O’Neill, Jamie McLennan, Craig Button and Darren Dreger.

The Nashville Predators drop out of top spot and into No. 2 following two straight weeks atop the rankings after going 1-2-1 last week. The Predators are tied with the Tampa Bay Lightning for the overall standings lead with 29 points apiece. The Lightning, who are missing star goalie Andrei Vasilevskiy (broken foot), move down one spot to No. 3 after going 2-1 last week.

Winners of three straight, the Columbus Blue Jackets leap nine spots to No. 4 following a 3-0 week. The Blue Jackets have earned a point in seven straight games and are just ahead of the sizzling Buffalo Sabres, who jump to No. 5 from No. 12 a week ago after five straight victories to round out our panel’s top five. Last season 20 games into the 2017-18 campaign, the Sabres were 5-11-4 and mired in a five-game losing skid.

Aside from the top-ranked Leafs, the best Canadian teams this week include the Winnipeg Jets at No. 6, the No. 9 Montreal Canadiens, the No. 13 Calgary Flames and the improving Ottawa Senators at No. 17. The Senators make the biggest jump of the week in our rankings, leaping 11 spots with two straight wins after sitting in the bottom five of last week’s rankings at No. 28.

Struggling teams north of the border this week include the Vancouver Canucks, who have lost five straight to plummet 13 spots - the most noteworthy decline of this week's rankings - to No. 20 after our panel ranked Elias Pettersson and company No. 7 a week ago, and the Edmonton Oilers, who were No. 6 two weeks ago but are 0-4 in their last four games on the road, have lost two in a row and six of their last seven to drop two spots to No. 26.

The five worst teams in the NHL this week include the Anaheim Ducks, stuck at the No. 27 spot as they continue to have major difficulties scoring; the No. 28 New Jersey Devils, who went 2-1-1 last week but are just 2-8 on the road this season; the St. Louis Blues at No. 29, falling five places after being shut out in two of their last three games, the No. 30 Pittsburgh Penguins, who drop 11 spots from No. 19 a week ago after losing three straight to sit dead last in the Eastern Conference, and the Los Angeles Kings at No. 31, missing in action with an offence that just can’t score this season, managing a league-worst 38 goals in 19 games.

The Kings were 11-6-2 after 19 games last season and captain Anze Kopitar had 14 points in October, 14 points in November and finished the season with 92. A struggling Kopitar has just eight points in 18 games this season.

A three-game West Coast road trip couldn’t have gone better for the Leafs. They won all three games – Los Angeles, San Jose and Anaheim. Mitch Marner led the scoring with one goal and five assists.

After winning their first eight games on the road, the Predators lost three in a row (one by shootout). They also ended their streak of scoring at least three goals per road game with two one-goal games.

Andrei Vasilevskiy will be lost to the Lightning for four to six weeks with a broken foot. The power play, however, picked a good time to catch fire with seven goals in consecutive road victories.

Cam Atkinson earned his franchise tying (Rick Nash) fifth career hat trick to lead the Blue Jackets to a 7-3 win over Florida. They’ve won three in a row and have earned a point in seven straight games.

A current five-game winning streak is the longest for the Sabres since five in a row in the 2011-12 season. Rasmus Dahlin’s five points (1-4-5) is tied for the streak’s point lead with three other players.

The Jets continue to lead the NHL in power play percentage by a wide margin with a 33.3 rating. If they can keep that up it will be the best in NHL history – the current record is 31.9 (1977-78, Montreal).

The Wild returned home after a successful road trip (5-0-2) and then lost three of their next four, two of those at home. Despite that, they still have the second-most points in the Western Conference.

The Canadiens came out of Alberta with two 3-2 wins that featured two third-period goals in each game. Team scoring leader Max Domi (11th in NHL scoring) has 10 goals, one more than all of last season.

It’s rare when a team can shut down Boston’s top line but Ben Bishop and the Stars managed to do it in a 1-0 overtime victory and Jason Dickinson scored his second OT winner of the season.

The Sharks have allowed just one power play goal in their last 16 games, Joe Pavelski has scored a goal in four straight games, and Erik Karlsson scored his first goal as a Shark.

Goals against has been a problem for the Avs in November as they’re averaging 4.00 goals against, second worst in the league. Their save percentage of .869 is the worst for the month so far.

All good news for the Rangers who have won five straight at home, are 7-1-1 in their last nine and Henrik Lundqvist moved into seventh place all-time with his 438th career victory.

The Islanders exploded for 12 goals in a two-game home winning streak before collapsing 6-2 to Dallas on Sunday. Since losing their opening home game the Islanders are 5-1-2 at home.

Pheonix Copley has filled in admirably for Braden Holtby during his injury. The Caps went to three tough places to play and won in Minnesota and Colorado, while losing 3-1 (one empty-net goal) in Winnipeg.

Craig Anderson stopped two third period penalty shots to defeat Detroit 2-1. The Senators are 4-3-1 in November and Mark Stone leads all league scorers with 5-10-15 for the month in nine games.

The Hurricanes scored two goals in the first 30 seconds of their game against New Jersey and that’s all they needed for the 2-1 win. The record is 24 seconds from the start of a game (Edmonton, 1981-82).

Vancouver’s season has taken a turn with five losses in a row (one in a shootout). Over that span they’ve been outscored 19-10. Elias Pettersson hit a dry spell with no points in the first four losses.

A fierce comeback against Tampa Bay that included four goals in 6:04 of the third period still resulted in Philadelphia’s third consecutive home loss, but they did earn a point when they forced it to overtime.

Corey Crawford took it upon himself to get the first win for Chicago’s new coach Jeremy Colliton in a 1-0 shutout of St. Louis. They’re now on a four-game point streak (2-0-2).

The Panthers ended a five-game winning streak with consecutive losses, but Mike Hoffman continues to score no matter the outcome. He has points in 15 consecutive games (8-10-18).

Marc-Andre Fleury earned his third shutout of the season (5-0 over Anaheim) but overall the team continues to struggle. When Fleury doesn’t shut out the opponent the Golden Knights are 6-11-1.

The Coyotes are having scoring troubles again, managing one or zero goals in three of their last five games. They have no problems scoring shorthanded, however, with 10, led by Michael Grabner’s four.

The Oilers started off the season 5-2-0 on the road, but since then they are 0-4 and have been outscored 17-7. Home hasn’t been great lately either, with losses in two of their last three.

Goal scoring continues to be a problem for the Ducks. They’ve scored just one or zero goals in five of their last seven games, and their 2.09 overall goals per game ranks 30th in the league.

Keith Kinkaid’s third shutout of the season gave the Devils their first two-game winning streak since mid-October and just their second road win of the season. They’re 6-1-2 at home and 2-8-0 on the road.

The Blues have been shut out in two of their last three games. Even with that, Ryan O’Reilly has seven goals in eight games in the month of November, one shy of the league leaders.

One win in their last nine games (1-7-1) and three consecutive losses have led the Penguins below the .500 mark. They haven’t finished a season below that mark since the 2005-06 campaign.