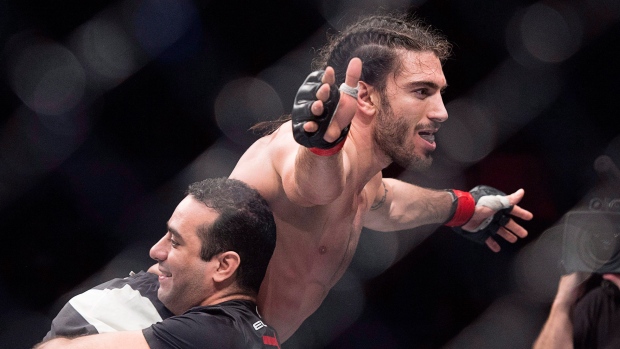 The UFC will be returning to Ottawa for their second-ever event in the city this May.

David Shaw, the UFC’s senior vice president of international and content, announced on TSN Radio 1200 in Ottawa Wednesday that the promotion will be holding an event on May 4 at the Canadian Tire Centre in Kanata.

This will be the first event that the UFC has held at the Canadian Tire Centre. The previous event, headlined by Canadian Rory MacDonald and Stephen Thompson on June 18, 2016, was held at the smaller TD Place Arena in Ottawa. That event set a record at the time for the fastest arena sellout in the history of the venue.

While the main event is still to be confirmed, the scheduled matchups are rife with Canadians.

The highest profile bout thus far features eighth-ranked middleweight Derek Brunson facing 14th-ranked Toronto native Elias Theodorou. Theodorou boasts an 8-2 UFC record and has won five of his last six fights. Brunson is 2-4 in his last six fights, which includes losses to some of the best middleweights in the division, including champion Robert Whittaker and Israel Adesanya.

The event will also feature the much-anticipated debut of Gatineau, Que., native Marc-Andre Barriault, who is currently a two-division champion (middleweight and light heavyweight) of TKO, a Quebec-based regional promotion. Barriault will face Ultimate Fighter 23 winner Andrew Sanchez in the middleweight division.

Highly touted heavyweight prospects Arjan Singh Bhullar (Richmond, B.C.) and Juan “The Kraken” Adams will also square off. Bhullar is 2-1 in the UFC and won a gold medal at the 2010 Pan Am Games in 120 kg freestyle wrestling. Adams is a 6-foot-5 behemoth who cuts weight to make the 265-pound limit and has an undefeated 5-0 record, including a win in his UFC debut in December.

Brad Katona, the only Canadian to ever win a non-territorial season of The Ultimate Fighter, will face Merab Dvalishvili in the bantamweight division. Katona, a Winnipeg native, is 2-0 in the UFC with an undefeated overall record of 8-0.

Montreal’s Aiemann Zahabi, who’s older brother, Firas, is Georges St. Pierre’s head coach and runs the famed Tristar Gym where many of the top Canadians in mixed martial arts train, is also scheduled to fight on the card. Zahabi, who is 1-1 in the UFC, will face Vince Morales, who holds a 0-1 UFC record.

Other Canadians competing on the card will be bantamweight Mitch Gagnon (Sudbury, Ont.), who returns after a two-year layoff to face Brian “Boom” Keller, and women’s bantamweight Sarah Moras (Kelowna, B.C.), who faces Leah Letson.

Tickets for the event go on sale to the public on Friday, March 8 with the UFC Fight Club presale on Wednesday, March 6 and the UFC Newsletter presale on Thursday, March 7.