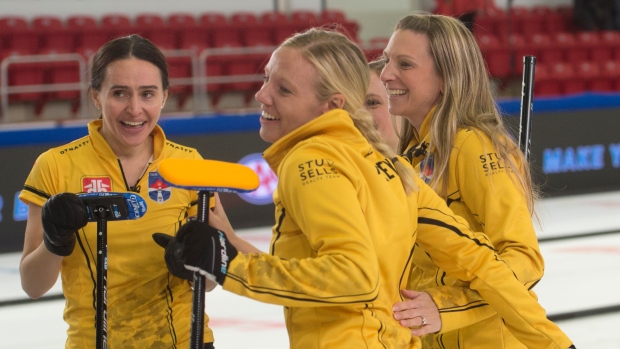 Highlights: Aside from the Pre-Trials, Team Harrison have qualified for the playoffs in each of the three events on Tour they’ve played with their best appearance coming at the Oakville Fall Classic, losing to Suzanne Birt in the semifinals.

Qualified for the Tim Hortons Curling Trials by beating Corryn Brown in the B-side final at the Home Hardware Curling Pre-Trials in Liverpool, N.S., in late October.

Team Harrison will win the Trials if…

"The success of Team Harrison this week may come down to the back-end duo of Jacqueline Harrison and Alli Flaxey. This is still a new-ish team on Tour and the question will be how the experienced back-end can work together in close games with the pressure on. This team’s best chance of winning the Trials is to arrive in Saskatoon, settle in, play loose all week and survive the early schedule of Homan, Jones and Einarson to start the week."

Allison Flaxey skipped a rink at the 2017 Trials in Ottawa, featuring Lynn Kreviazuk at second. They finished last with one win and seven losses.

Jacqueline Harrison and Laura Hickey have never competed in an Olympic Trials.

Most casual curling fans will get to know Harrison’s name for the first time at the 2021 Tim Hortons Curling Trials.

The 43-year-old has never competed in a Trials or a Scotties Tournament of Hearts and has only played a handful of events on the Grand Slam circuit in her career, never winning.

"We're a newer team and haven't been together as long as some of the other really great teams here," Harrison said after her Pre-Trials victory. "We take the underdog role and run with it.

"We know we can fly a bit under the radar so we took that to our advantage and had a great week. The team played so well [Sunday] and all week so to come into this week and come out with a victory? I can’t even describe it."

Team Harrison formed ahead of last season but weren’t able to play in a competitive event together until this season due to the pandemic.

Flaxey and Kreviazuk represented Team Ontario at the 2014 Scotties, finishing with a 3-8 record.

Kreviazuk played lead for Rachel Homan in juniors, winning gold at the 2010 Canadian Junior Curling Championships and silver at the worlds that same year.