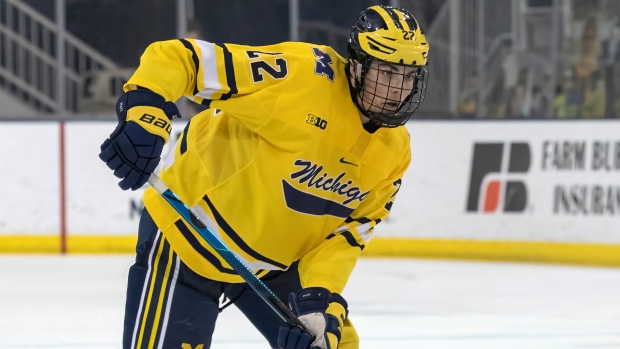 Owen Power and Cole Perfetti among the non-NHL players Team Canada will be taking to Latvia for the Men’s World Championship.

Power, a defenceman playing with the University of Michigan, was the unanimous No. 1 prospect in TSN's mid-season draft rankings, released last month. Perfetti was selected by the Winnipeg Jets in the 2020 NHL Draft. He had nine goals and 17 assists in 32 games with the AHL's Manitoba Moose this season.

Braden Schneider, who was selected 19th overall in the 2020 Draft by the New York Rangers, will also accompany Team Canada to the World Championship, per Dreger. Schneider had five goals and 22 assists in 22 games with the WHL's Brandon Wheat Kings this season.

Dreger also reported the Arizona Coyotes' Darcy Kuemper and Adin Hill, and the Vancouver Canucks' Michael DiPietro will be Team Canada's goalies for the tournament.

DiPietro appeared in three games with the Canucks' AHL affiliate Utica Comets, recording a 2-1-0 record, .894 save percentage, and 3.03 GAA.