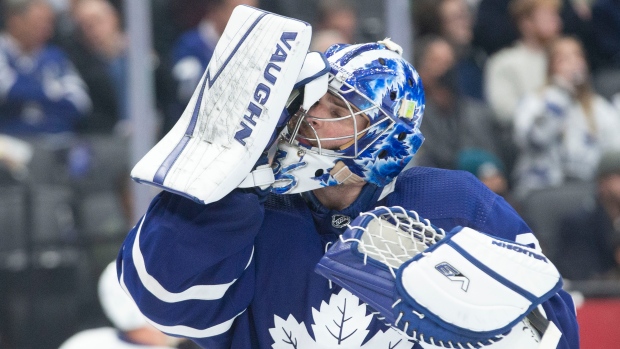 TORONTO — The Toronto Maple Leafs will be without No. 1 goaltender Jack Campbell for at least the next two weeks because of a rib injury.

Head coach Sheldon Keefe told reporters following Thursday's morning skate the 30-year-old "tweaked something" a while ago and then aggravated the issue during a 26-save performance in Tuesday's 6-4 victory over the Seattle Kraken.

"I knew that he was uncomfortable after the game, and (Wednesday) wasn't feeling a lot better," Keefe said prior to the Leafs' game against the Arizona Coyotes. "They sent him for some tests and ultimately found out he needs some time."

Campbell had an excellent start to the season to earn his first all-star nod, but owns an .865 save percentage since Jan. 15.

"Hopefully it's nothing too long or too serious," Leafs centre Auston Matthews said of the netminder's ailment. "He's one of the hardest working guys that I've been around.

"There's no doubt in my mind that he'll work himself back up when he's healthy."

Toronto's crease in the short-term now belongs to Petr Mrazek, who signed a three-year contract in free agency in July, but had a tough start to his tenure with the Leafs after twice being felled by a groin injury in the fall.

"Petr's been great," Matthews said. "He comes to the rink every day with a smile, has fun out there.

"A really good addition to our team on the ice and off the ice."

The Leafs have recalled Erik Kallgren from the AHL's Toronto Marlies on an emergency basis.

The 25-year-old from Stockholm has a 15-8-1 record with a .904 save percentage in his first campaign with the Marlies.

Kallgren was expected to serve as Mrazek's backup Thursday against Arizona.

"They really like his demeanour and his work ethic," Keefe said of the Swede's AHL work. "This will certainly will be an opportunity for Petr to run with it here.

"And a good chance for us to get to know Kallgren better."

This report by The Canadian Press was first published March 10, 2022.