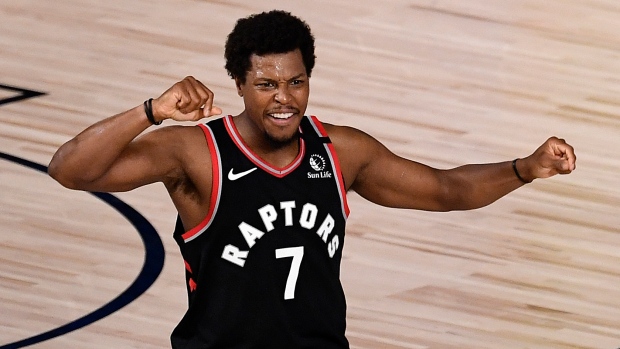 TORONTO – Their heads are still spinning, coming off that accelerated NBA off-season – three months’ worth of activity condensed into a chaotic one-week stretch. Now, the Toronto Raptors are bracing themselves for what promises to be another unprecedented and unusual experience in training camp.

On Monday evening, the team will travel to Tampa, Fla. – its new, temporary home, where it’ll host camp, as well as regular season games for the foreseeable future.

Upon arrival, players are required to return at least three negative COVID-19 tests before they can be cleared for individual workouts, which will begin on Tuesday and continue throughout the week.

The Raptors will hold camp at Saint Leo University – roughly 30 minutes north of Tampa’s Amalie Arena, where they’ll play their games. Assuming all goes according to plan, their first team practice is scheduled for Sunday, with their first of three pre-season games slated for the following weekend and the regular season set to tip off 10 days after that.

Each of the league’s other 29 teams will also be working under a similarly tight timeline, but the Raptors are the only club that will have to manage it while also moving their operations more than 2,000 kilometres south and getting comfortable in a new home city.

The NBA didn’t issue its comprehensive 134-page health and safety protocol guide to teams until Saturday morning, just a couple days before Toronto was due to fly to Florida. Meaning that, as of Monday morning, several Raptors players and staff members were still unsure of what they would even be allowed to do once they landed. And, far more importantly, for the team’s Toronto-based employees – many of whom left home on Monday without knowing for sure when they’ll be back – this will be the start of a long stretch of time away from their loved ones.

These next few weeks will surely be a whirlwind, but despite the circumstances, it’s still business as usual, with the organization preparing for the start of the 2020-21 campaign.

Nick Nurse and his coaching staff will be tasked with getting the new faces acclimated to the familiar ones and making sure that everybody is ready to go ahead of opening night on Dec. 22. Meanwhile, Masai Ujiri, Bobby Webster and Toronto’s front office still have some important decisions to make – both of short and long-term consequence.

THE ROSTER AND POSITION BATTLES

The Raptors’ roster stands at 20 players – the maximum allowed going into training camp.

They’ve got 13 players under fully guaranteed contracts for this season.

Davis’ contract became fully guaranteed on Sunday. He’s expected to be in camp, though his future with the team – and perhaps in the league – is uncertain as he faces seven charges after being arrested for allegedly assaulting his girlfriend in New York City last month. According to the league’s collective bargaining agreement, the Raptors are required to cede the investigation process – which is currently ongoing – and any subsequent discipline to the NBA and the players’ association. Davis’ next court date is scheduled for Dec. 11.

After carving out his role as a situational sharpshooter coming off the bench last season, Thomas is virtually a lock to make the team. Nearly half of his second-year salary ($1.78 million) is guaranteed. His contract will become fully guaranteed in February.

With Thomas and the 13 guaranteed players, that leaves one roster spot up for grabs in camp.

As Blake Murphy of The Athletic first reported last week, Watanabe and Johnson – who are signed to Exhibit 10 contracts – as well as Ellenson and Brissett were given small guarantees to attend camp and battle for that final spot.

Brissett – the Toronto native who was with the Raptors on a two-way deal last season – should be considered a strong favourite in that race, given the time he’s spent in the organization and playing for Nurse with the Canadian national team. Brissett knows Nurse’s system well, the Raptors already have an investment in his development, and the young forward impressed during his brief stint in the rotation as a rookie.

Assuming they clear waivers, the others would be candidates to join the 905, though it’s still uncertain what the G League season could look like.

Watson, who signed a two-way deal with Toronto last January, enters his second season in that role, while Harris – the team’s second-round pick from this month’s draft – will claim the second two-way spot, according to Keith Smith of Yahoo! Sports. With two-way players allowed to spend more time with NBA clubs this season, the Raptors will be able to get a good look at them both. Watson, in particular, was a standout in the bubble this past summer.

With four starters returning from last season (Lowry, VanVleet, Anunoby and Siakam), the first unit is mostly set. The biggest question, in terms of the rotation, is how minutes will be distributed at the centre position following the departures of Marc Gasol and Serge Ibaka.

Baynes is likely the frontrunner to start games at the five, although we know Nurse isn’t opposed to leaving his lineups fluid. If and when he opts to go small, Powell should see plenty of time with the other four starters – which could be a popular closing unit.

Anunoby is eligible to sign a rookie scale contract extension until the eve of the regular season. Otherwise, he’ll become a restricted free agent after the campaign, meaning Toronto will be able to match any offer sheet he might sign next summer.

The talented forward is coming off an excellent third season. He’s a big part of Toronto’s young core and the Raptors intend to keep him around for a while. With that said, the decision they’ll have to make – lock him up now or wait until next summer – is a complicated one.

The benefit to extending Anunoby over the coming weeks, in addition to continuing to build goodwill with the player and his representatives, is that it will likely cost less to sign him now than it would once he hits restricted free agency and other teams are able to up the bidding.

The argument for waiting centres on cap management. If the Raptors extend him, his new contract will be on the books following this season, cutting into the team’s coveted cap room for next summer. If they wait, they’ll only have to work around his smaller cap hold of $11.6 million. Theoretically, they could use their space to sign a big-name free agent next off-season, then exceed the cap or even go into the luxury tax to re-sign Anunoby, or match an offer sheet.

Keeping their books as clean as possible following this season in the hopes of chasing a max salary player in 2021 has been a very clear priority for the Raptors these past few weeks. Unless Anunoby is willing to sign at a discount, it seems unlikely that they’ll reach an before the extension window closes.

It should be noted that this is also the deadline for Giannis Antetokounmpo to sign his super-max contract extension with the Bucks. Until he makes his decision known – or until this day passes – the future of the reigning two-time MVP will be the biggest story in the NBA, and something that the Raptors are keeping a close eye on.

It's fair to wonder whether they're waiting on Antetokounmpo's decision to determine what they're going to do with Anunoby. If the 'Greek Freak' commits to Milwaukee, taking him off the board for next summer’s free agency frenzy, would Toronto be more inclined to extend Anunoby ahead of the deadline?

December 22: Opening night in the NBA