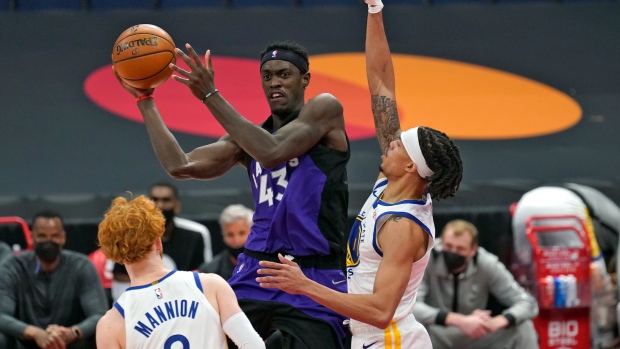 TSN's Josh Lewenberg reports Siakam and the Raptors had hoped to avoid surgery and instead use rest and rehab to heal the injury, but the risk of re-injury was ultimately deemed too high.

Siakam and the Raptors had hoped to avoid surgery and go the rest/rehab route once the season ended but the risk of re-injuring it (and the severity of a subsequent injury) was ultimately deemed too high, according to a source close to Pascal.

The 27-year-old is expected to miss the start of next season, which will reportedly start in October.

Expected 5-month timetable would mean an early November return to the court. Tough blow for Siakam and the Raptors. Not only is he likely to miss the start of next season (which opens mid Oct.) but he loses what would’ve been a crucial offseason for his continued development.

The Raptors said the injury occurred on May 8 against the Memphis Grizzlies. The surgery was performed by Dr. Neal ElAttrache at Kerlan-Jobe Orthopaedic Clinic in Los Angeles.

"Right Call" to Opt for Surgery

Lewenberg adds that Siakam is disappointed, but is holding up OK and understands that surgery was the right call, long-term.

The surgery is the same one Los Angeles Clippers star Paul George had in 2019. Lewenberg adds that George's injuries were more severe and had surgery on both shoulders which kept him out for six months. Siakam's recovery should be quicker and can start on-court rehab in July.

Siakam is holding up OK, given the circumstances, I'm told. He's obviously disappointed – this is more downtime than he expected or wanted to have this summer – but he understands that opting for surgery was the right call, long-term. Now his shoulder will be stronger.