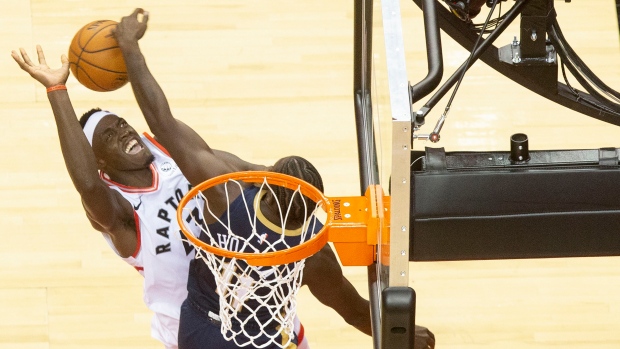 TORONTO – When he wasn’t performing on stage with the Arkells or singing Take Me Out to the Ball Game at Wrigley Field, Nick Nurse spent a busy summer trying to figure out what he was going to do for an encore in his second season as head coach of the Raptors.

How do you follow an NBA championship in your first year on the job?

Always looking for inspiration from other great coaches, even in other leagues, Nurse reached out to an organization that would know a thing or two about sustained success: the New England Patriots.

Under the leadership of Bill Belichick, the Patriots have achieved an unparalleled level of success: 16 playoff appearances in 19 seasons, nine AFC championships, and six Super Bowls, with their most recent coming last February. It’s no wonder that Nurse wanted to pick their brains.

The Patriots invited Nurse to Foxborough, Mass., where he spent a day watching Belichick conduct training camp in July.

The Raptors return to TSN on Friday! Stream Raptors vs Celtics, along with 40 more Raptors & +200 U.S. games this season with TSN Direct.

Nurse has crossed sports before. He visited with Los Angeles coach Sean McVay at Rams’ camp the previous summer. He’s also met with World Series-winning manager Joe Maddon when he was with the Chicago Cubs. This was a bit different, though. The Patriots aren’t just an NFL dynasty – they’re the gold standard in professional sports. This was a rare opportunity to see how the sausage is made, and it didn’t disappoint.

“It was obviously really cool, going there and watching those guys in training camp,” Toronto’s 52-year-old head coach said. “It’s always such a [great] experience to see how teams operate, but [especially] how a super high-level team like that operates.”

The coolest part, according to Nurse, was watching 42-year-old quarterback and future hall-of-famer Tom Brady practice.

“I was just amazed by his work and leadership,” he said. “It was like late July and he was acting like if they didn’t have a great practice that day they had no chance of winning the Super Bowl. He was taking every rep and coaching every player he could.”

Nurse watched Brady in awe, but he studied how Belichick managed camp. When they got a chance to speak, Nurse asked the 67-year-old Patriots head coach if he does anything differently coming back after winning it all the year before.

“He said, listen, a couple things, we go to work every day, we really try to grind it out every day just like we would at any time,” Nurse recalled. “He said I try to make practices maybe even harder, certainly harder than maybe a game would be. And they were doing a lot of cool things that were proving that. I guess it’s simple – can you focus and get your butt back to work? And that’s what we’re trying to do here.”

As the Raptors look to defend their title, they’ve implemented that same philosophy. While they still feel like champions, and they’ve certainly carried themselves with that championship swagger throughout camp and early in the season, it hasn’t changed the way they approach their business in practice or on the court.

Behind the scenes, there’s minimal talk of what happened last year and the elephant in the room, Kawhi Leonard, has not been mentioned, according to Nurse and several of the players. Ever since they reconvened for camp in Quebec City almost a month ago, their focus has been on the challenge that lies ahead. Now they’ll have an easier time looking forward.

To a man, the team admitted that Tuesday night’s opener was a lot more emotional than they had expected. Perhaps that’s because they’ve been trying so hard to stay locked in on the upcoming season. Perhaps it’s because, outside of three-time champion Patrick McCaw, this was a first for everyone.

Just before they tipped off the 2019-20 NBA season against New Orleans, the Raptors received their championship rings and raised the banner to the rafters at Scotiabank Arena.

It was a chance for them to relive the highs and lows of the historic playoff run, check out the rings – which set records as the largest and most valuable ever produced for an NBA champion – and finally close the book on last season’s accomplishments.

They had obviously been looking forward to this night but, now that it’s over, there’s a sense of relief that it has come and gone.

After the game – a 130-122 overtime win over the Pelicans – they went out for a team dinner, one last celebration as champions before moving on to the next chapter the following day.

“It was a great bookend. It was a great way to end it all,” said Fred VanVleet, who scored a career-high 34 points on opening night and will inherit an expanded – and perhaps starting – role this season. “You have to do this type of ceremony, see the banner, see the ring. But [I’m] just so excited to start this year off with a different group, some new challenges. It’s very fun to be in the position that we’re in, where we just won it but we’re kinda on the climb again. We’re attacking another title. There’s going to be some ups and downs and some struggles but you can relish it and understand it more after winning one because you understand what it takes to get there and how long a season is.”

“For me, it was the contract, getting it out of the way, and for our team it was the celebration,” said Pascal Siakam, who recorded 34 points, 18 rebounds and five assists in his first game since signing a four-year, $130 million max extension earlier this week. “After that [we can] kinda just move onto the season. We’re all excited for the season.”

If you were a part of that championship – either as a player, coach or fan – it’s something you will never forget. That’s not going anywhere and neither is the banner, which will forever serve as a reminder of what that 2018-19 Raptors team accomplished.

However, as Nurse learned firsthand from Belichick and the Patriots this past summer, if you want to experience that feeling again you can’t stop and spend too much time looking back.

The new season is here and the Raptors are ready to officially turn the page.​