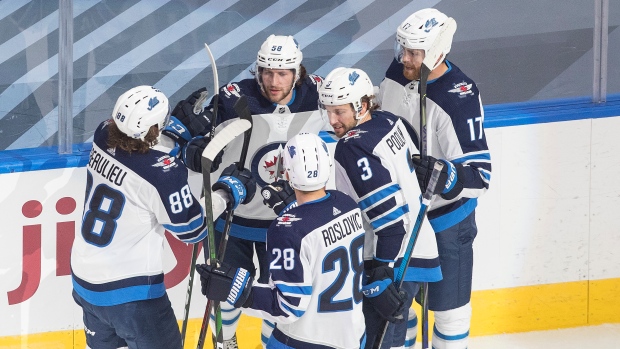 WINNIPEG (October 5, 2020) – As the NHL begins its offseason after a very memorable 2019-20 campaign, True North Sports + Entertainment and TSN have announced a multi-year extension of their regional television rights partnership. Through this new extension, TSN continues to be the official broadcaster of Winnipeg Jets regional regular season games.

“True North Sports + Entertainment is very excited to share with Winnipeg Jets fans that they will be able to enjoy the experience of watching JETS ON TSN for years to come,” said Mark Chipman, Executive Chairman and Governor, True North Sports + Entertainment and Winnipeg Jets Hockey Club. “With some of the best sports broadcasters in the business, outstanding live production, and significant reach throughout all their platforms, Jets fans will continue to receive the comprehensive high-quality coverage they’ve come to expect from JETS ON TSN.”

“TSN is very proud to be the official regional broadcaster of the Winnipeg Jets, and we’re thrilled to extend this successful partnership for years to come,” said Stewart Johnston, President, Media Sales and Marketing, Bell Media, and President of TSN. “The Jets boast a competitive roster of dynamic young players, and JETS ON TSN games are an integral part of TSN’s hockey coverage, with regular season games broadcast regionally on TSN’s television and digital platforms.”

TSN’s regional Winnipeg Jets games will continue to be available on TSN3, TSN.ca, and the TSN app to TSN and TSN Direct subscribers in the Jets’ designated broadcast region as defined by the NHL, which includes Manitoba, Saskatchewan, Nunavut, the Northwest Territories, and parts of Northwestern Ontario including Kenora, Dryden, and Thunder Bay.