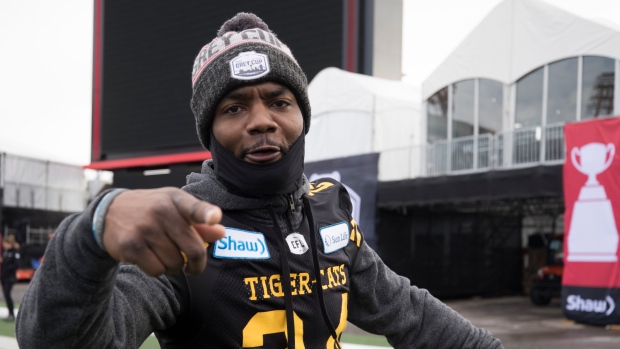 “I just want to thank God for giving me the opportunity to make my journey pass through Hamilton, Ontario," Breaux Sr. said in a statement. "I pursued this dream because I wanted to show each and every individual that there is hope inside that no one can ever take away from you when you believe in yourself. I want to thank my dad and my moms for raising me to be a tough son of a gun: “BUILT BREAUX TOUGH!” I want to thank my coaches and the organizations I was a part of for not just teaching me about the game, but more importantly about life itself. I want to thank my brothers (teammates) for everything from showing me the way to enjoy the game without being serious 24/7, to playing with a smile on my face while I jam and beat wideouts up in the boundary. And finally, I want to thank the fans for bringing me in and accepting a Nola Bread kid for life. In Hamilton, you all supported me when I had no family or friends in town for the games and made me feel like I was at home and loved, so thank you! I know it’s just a dot on my timeline but it was a huge dot because of everything I dealt with early in my playing career. Until next time, BREAUXSHOW, out.”

“It is extremely rare when you find a DB that possesses size, strength, speed, aggressiveness, competitiveness and confidence. Offences changed the way they game-planned knowing that #24 was manning the boundary,” Tiger-Cats head coach Orlondo Steinauer said. “Delvin was one of the most dominant CFL corners of his era, and considering what he overcame early in his playing career, it makes his accomplishments at the professional level more than remarkable. So thank you, Delvin, for your time, dedication and commitment to the Tiger-Cats. We wish you and your family all the best during your next chapter.”