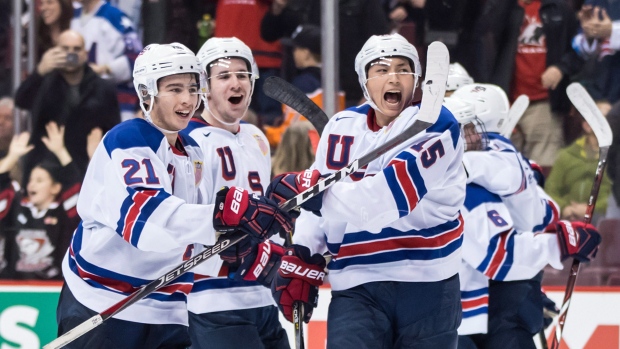 VANCOUVER — American goalie Cayden Primeau just tried to stay calm and composed as the clock ticked down at the world junior hockey championship on Friday.

His team was up a goal on Russia in the final minutes of the semifinal match up, and the Montreal Canadiens prospect knew there were more shots to come.

"I was just trying to stay big, then you can celebrate after the buzzer has gone," Primeau said after the U.S. captured the 2-1 win, punching its ticket to the tournament's gold-medal game.

It was Russia's first loss at this year's event, and came despite outshooting the Americans 36-27.

The Americans took home bronze from last year's tournament after beating Russia in the quarterfinals.

"When you play a team as good as Russia, they're going to get their chances and you need that last line of defence to be there for you, to allow you time to catch your breath at times," he said.

"Your best penalty killer needs to be your goaltender and he was tonight."

The U.S. got goals from Oliver Wahlstrom and Alexander Chmelevski and Grigori Denisenko responded for the Russians.

The loss was hard for Team Russia, forward Kirill Slepets said through a translator.

"It's a big disappointment but tomorrow is a new day, new game," he said.

"Our team is one of the best here. We were a little bit unlucky. Will fight for the medal tomorrow."

Despite the final score, Denisenko wasn't the only Russian to put the puck in the net.

Midway through the first frame, Dmitri Samorukov dished a pass off to Nikita Shashkov, drawing Primeau across the net. Shashkov deflected it in through the back door.

But officials reviewed the play and called off the goal, saying Shashkov kicked it in.

"We got a lucky bounce and they decided to call it off," Primeau said. "It was definitely a big one there and we got back to work."

Another close call came on a Russian power play early in the third period. A shot from Klim Kostin left the puck rolling along the goal line before U.S. defenceman Phil Kemp swatted it out of harm's way.

"It was crazy," said the Edmonton Oilers prospect, adding that he almost hit the post on the play. "To be honest, I wasn't really thinking about it, I was just trying to dig it out. That was a big kill for our team."

"I don't think anyone was feeling calm on the bench. We just knew we had to push back," he said.

It's good for young players to experience tight games like Friday's, Hastings said.

"Us as a coaching staff have talked about the ride this group has allowed us to be a part of and what they're trying to accomplish," he said. "It was an exciting night for us."

The Americans will find out later on Friday who they'll face in the finals.

Underdogs Finland and Switzerland were set to battle in a second semifinal match up later in the day.

A U.S.-Finland final would pit two of the world's most highly-touted prospects against one another.

Both the gold- and bronze-medal games will be played on Saturday.

NOTES: Denisenko now has eight points and is tied for first in the tournament's scoring race with U.S. forward Ryan Poehling and Canada's Morgan Frost. ... Several in the crowd of 14,355 at Vancouver's Rogers Arena wore jersey's bearing Quinn Hughes' name. The 19-year-old defenceman is a Vancouver Canucks prospect, currently playing at the University of Michigan.