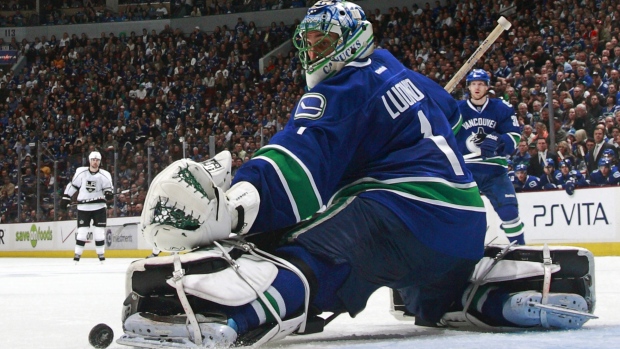 The Florida Panthers waited less than two months after Roberto Luongo retired to announce the goaltender would be the first player in team history to have his number retired.

It appears the Vancouver Canucks won't be as quick to honour the netminder.

A Canucks spokesperson told Patrick Johnston of the Vancouver Sun on Wednesday that their no are current plans for the franchise to honour Luongo.

“Roberto had an outstanding NHL career and was part of some of the biggest moments in Canucks history,” the spokesperson said in an email. “We’re sure his name will be included in future discussions; however, we don’t have any current plans for the upcoming season.”

He was dealt to the Panthers ahead of the trade deadline in 2014 after a tumultuous season with the Canucks, and the 40-year-old announcing his retirement in June left the Canucks with a cap recapture penalty of $3.03 million in each of the next three years.

The Canucks have already retired the numbers of Stan Smyl, Trevor Linden, Markus Naslund and Pavel Bure, while Daniel and Henrik Sedin will have their numbers put into the rafters in February. The franchise has also placed six names on their Ring of Honour in Orland Kurtenbach, Kirk McLean, Thomas Gradin, Harold Snepsts, Pat Quinn and Mattias Ohlund, and will add Alex Burrows to that list in December.

Luongo played in 448 games with the Canucks during his career, posting a 252-137-50 record with a .919 save percentage and a 2.36 goals-against average. He spent 11 seasons with the Panthers and ranks first in franchise history in games played, wins, saves and shutouts.