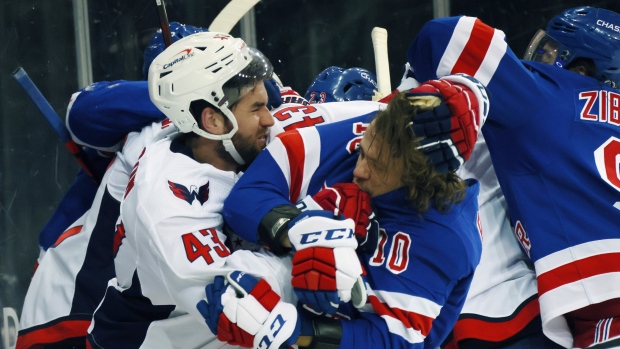 "I think he's a player that's great for the game. He's a great personality. He's a heck of a player, and I like battling against him," Wilson told reporters. "I just wanted to send him a text and check in."

Panarin was ruled out for the Rangers final three games of the season due to a lower-body injury sustained when he was wrestled to the ice by Wilson during a skirmish in Monday's game.

Wilson received a $5,000 fine for punching Pavel Buchnevich earlier in the same melee, but was not disciplined for the incident with Panarin, leading the Rangers to put of a statement calling for the removal of NHL Head of Player Safety George Parros. The league fined the Rangers $250,000 for that statement on Thursday.

"It was a crazy moment but one that's not rare to happen in a hockey game," Wilson added of Monday's events. "I'm trying to move on from it."

"Tom Wilson and Alex Ovechkin of the Washington Capitals both reached out to the New York Rangers’ Artemi Panarin just to make sure he was okay after Monday’s collection of incidents," Dreger said Thursday on Insider Trading. "This isn’t unusual despite what some may think of Wilson. He did want to make sure that Panarin was okay, because that did not go the way that Wilson was hoping. Both guys checked in on Panarin — and it sounds like Panarin will indeed be fine.

"This is evidence that the villain of the week, Wilson, does in fact have a heart."

Wilson, who fought Rangers defenceman Brendan Smith on his first shift of Wednesday's rematch between the two teams, left in the second period of that game with an upper-body injury. He has been cleared to return to the team's lineup for Friday's game against the Philadelphia Flyers.

The 27-year-old winger received his fifth career suspension in March with a seven-game ban for boarding Boston Bruins defenceman Brandon Carlo. He had previously received a 20-game suspension in 2018 for an illegal check to the head of St. Louis Blues forward Oskar Sundqvist in a preseason game. That suspension was later reduced to 14 games by a neutral arbitrator.

Wilson has 13 goals and 33 points in 44 games this season while picking up 84 minutes in penalties.