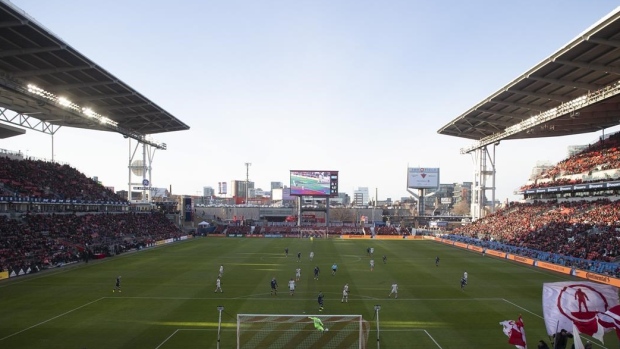 TORONTO — For the first time in two years, Toronto FC is looking forward to playing at BMO Field in front of 20,000-plus.

For the players, Saturday's home opener against the New York Red Bulls is a chance to reconnect with and build off the energy of their fans. For supporters, it's another sign of life returning to normal.

"(It's) staggering how long it's been," said Toronto president Bill Manning, the man charged with watching the MLS team's bottom line.

While noting early-season games historically aren't as strong as later on, Manning expects a crowd of 23,000 to 24,00 on the weekend.

"It seems like when (forward Ifunanyachi) Achara scored that goal, It was just so long ago," said Manning. "And I guess it was."

The MLS resumed play that July at the MLS is Back Tournament in the Orlando area. Due to border restrictions, Toronto then played three games at an empty BMO Field against fellow Canadian MLS teams before moving south to take up residence in Hartford.

TFC started the 2021 season based out of Orlando, returning home in mid-July to play out the season under a variety of crowd limits.

"Welcome back to BMO Field," the PA announcer said before introducing the TFC starting lineup. "It's been a long 16 months."

Attendance was capped at 7,000 that day with the crowd drawn from frontline health-care workers, first responders and season ticket-holders. The cap was raised to 15,000 for the next home match against the New York Red Bulls.

BMO Field was back at full capacity for Canada's 4-1 World Cup qualifying win over Panama on Oct. 13, with announced attendance of 26,622 after local authorities eased restrictions. But by that time, TFC fans had opted to stay away as the underperforming team finished out the year.

The club gave season ticket-holders the option to leave their money on account last season, an option taken by more than 80 per cent of members.

Toronto's season ticket base currently is almost 21,000, with more than 90 per cent renewal over the off-season with a "couple of thousand" new members. Manning believes demand for tickets will grow as summer comes and Italian star Lorenzo Insigne joins the club in July.

The club's season ticket record was a little more than 23,000 going into the 2018 campaign, after TFC's championship season.

The forecast calls for two degrees Celsius, feeling like minus-three for the 2 p.m. ET kickoff.

"We're just buzzing to get back on the pitch," said 19-year-old midfielder Jayden Nelson.

On Saturday, fans will not need proof of vaccination. Nor will they have to wear masks, given the game is outdoors.

Ontario lifted caps on attendance March 1, allowing the Toronto Raptors to play before 18,903 fans in their 109-108 win over Brooklyn on Tuesday at Scotiabank Arena. That was was just shy of a sellout of 19,800.

The Raptors hadn’t played in front of a full house at home since Dec. 13 versus Sacramento, when the rise of COVID-19 cases amid the Omicron variant resulted in a return to restrictions.

The Maple Leafs drew an announced crowd of 17,122 for Wednesday 5-1 loss to the Buffalo Sabres, in their first home game since restrictions were lifted.

This report by The Canadian Press was first published March 3, 2022.