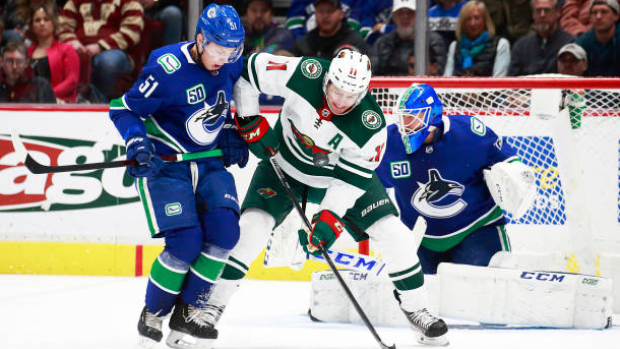 A week ago, we talked about the prospect of a 24-team return to play for the NHL and which teams potentially introduced to the postseason landscape could be threats to advance.

But it’s hard to know what upset potential really looks like until you see the framework of the postseason because matchups matter.

The NHL and NHLPA are pushing aggressively this week to finalize their 24-team plan, giving us some insight into the exact structure. The format – which gives the top four teams in each conference a bye and then brackets the next 16 teams by conference seed – has a March Madness feel to it, and most of the matchups are quite compelling.

As a quick refresher, I pulled out the key underlying numbers for those 16 potential play-in teams and calculated net advantage off a few key performance measures. Seventy games of regular-season data – whether you are looking at goal measures or shot measures – is more than enough to understand the competency of a team, but we are in unprecedented times, and no one is quite sure if these teams will be as effective as they were two months ago.

Outside of the Pittsburgh versus Montreal matchup, most of these teams are separated by relatively small goal differentials, which is encouraging if you are looking for a competitive series. In three of the eight matchups, the lower-seeded team actually carried a better goal differential than their respective opponent – that would include the Winnipeg Jets, Arizona Coyotes, and Florida Panthers.

So what are the questions surrounding each matchup? I’ve gone through all eight – let’s start in the Eastern Conference:

This is a grim match-up for a Columbus team that was right on the playoff cutline. Toronto is probably one of the best teams playing in the play-in round, and has the type of offensive potency to pick apart Columbus’ respectable defence. The question I’m most curious about: what do the Blue Jackets do in goal? The Joonas Korpisalo – Elvis Merzlikins tandem was fantastic to have in the regular season when starts can be rotated in and out, but John Tortorella just needs one of the two right now. Who would be the guy in Game 1 against Toronto?

This is probably the most lopsided of the eight potential first-round matchups. Pittsburgh has a distinct advantage just about everywhere on the ice, with one exception – they’d be facing one of the most puck-dominant teams in the league in Montreal, who actually carried shot differentials equivalent to the Vegas Golden Knights. That’s not insignificant, because Montreal was actually a goal-positive team (+7) at even strength. But in all other game states they were -16, and that’s bad news against a now-healthy Penguins team that tends to burn opponents on special teams.

Sergei Bobrovsky had a disastrous first season in Florida, but if you think that he can be competitive enough in a short series, you have to like the Panthers as a possible upset pick. This Panthers team – with capable offensive weaponry in Jonathan Huberdeau, Alex Barkov, Mike Hoffman, and Evgenii Dadonov – are a much more puck-dominant squad that converts on a higher percentage of their scoring opportunities. You sort of envision a series in which the Islanders will need to lean rather heavily on the likes of Semyon Varlamov (or Thomas Greiss for that matter).

The Hurricanes love playing the offensive zone cycle game, generating multi-shot shifts and applying regular pressure to opposing goaltenders. The Rangers live off the counterattack, and have a capable top-six anchored by Artemi Panarin and Mika Zibanejad. Much like Columbus, I’m fascinated to see what New York does in net – whether it’s Henrik Lundqvist, Alexandar Georgiev, or even Igor Shesterkin, the Rangers are going to be rather busy against a Hurricanes team that took nearly 300 more shots this season.

In the Western Conference:

Winnipeg is a very flawed team with serious, albeit shorter-term concerns over how to deploy their young blueline. But you do have to love this matchup for the Jets. Despite being the lower seed, the Jets were 18 goals better than the Flames this season, and a lot of that has to do with having a soon-to-be Vezina Trophy-winning goaltender in Connor Hellebuyck. Even conceding this Jets lineup has structural problems in the skater ranks, the star talent on the Jets roster is obvious, and Hellebuyck carries a significant advantage over David Rittich or Cam Talbot.

I hope this matchup comes to fruition, because the offence will be electric and the defence will be non-existent. The three head-to-head matchups this regular season saw 19 goals scored, and both Edmonton (23rd) and Chicago (29th) finished near the bottom of the league in expected goals against. Between the likes of Connor McDavid, Leon Draisaitl, and Patrick Kane, we are going to see some absolute offensive wizardry.

Vancouver is the better team – that much is obvious. They have an elite first line anchored by Elias Pettersson, a very capable pairing behind them anchored by Quinn Hughes, and a goaltender in Jacob Markstrom who will get serious Vezina consideration behind the aforementioned Hellebuyck. Minnesota’s roster is, in one word, transitioning. But I noted last week that the Wild are really the most curious outlier of sorts – a team where we think their defensive capabilities are much better than what they have shown this season, with some of their work submarined by a woeful Devan Dubnyk (.890 save percentage) campaign. But I always come back to this chart, one that shows just how fantastic Minnesota is at keeping shooters away from dangerous areas. Might this be enough to give Vancouver’s young talent some problems in the opening round? 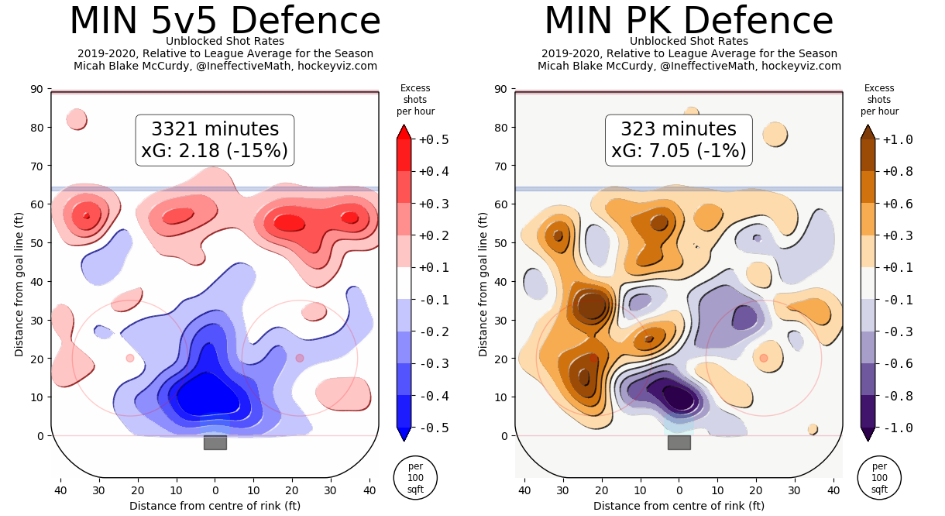 This is another instance in which the lower-seeded team actually outperformed the higher-seeded team this season, with the Coyotes 10 goals clear of a Predators club that really was stuck in mud for most of the regular season. The proposed 24-team format would give Arizona a second opportunity to see what they have in the recently acquired Taylor Hall, who gives the Coyotes some ample star power to compete with the likes of Roman Josi, Filip Forsberg and Matt Duchene. Quiet as it was kept, Hall was quite productive (10 goals, 17 assists) in 35 games with Arizona, playing alongside Christian Dvorak and Conor Garland. Remember, Hall’s contract expires at season’s end, and Arizona paid a hefty price for the winger.