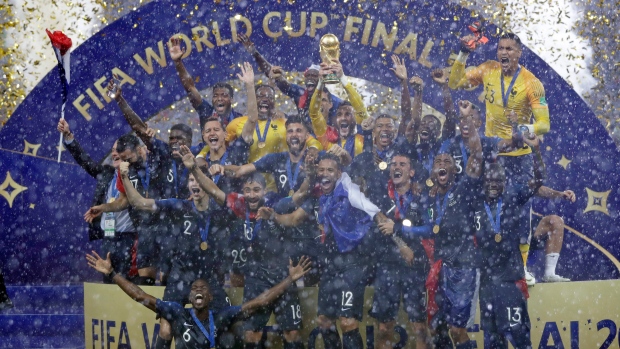 A total of 25.8 million viewers watched the FIFA WORLD CUP™ on CTV, TSN, and RDS, it was announced today, accounting for 72% of the Canadian population.

Preliminary overnight data from Numeris confirms that an average audience of 3.9 million viewers watched the FIFA WORLD CUP™ Final on Sunday. Audiences peaked at 5.4 million viewers at 12:53 p.m. ET as France secured their second-ever FIFA WORLD CUP™ victory. France’s win over Croatia was the most-watched match of the tournament, with a total reach of 9.3 million unique Canadian viewers, or 26% of Canadians, tuning in for the Final. TSN and CTV were the first and second-most-watched networks of the day, respectively.

The strong audiences for the Final reflect the network’s solid performance throughout the FIFA WORLD CUP™, as Canadians watched a total of 200 million hours of coverage during the tournament on CTV, TSN, and RDS. CTV and TSN were the first and second-most-watched networks during the tournament, respectively, as TSN fortified its position as Canada’s most-watched specialty network.

Additionally, the England vs. Croatia semi-final match was the second-most-watched match of the tournament, attracting an average audience of 2.5 million viewers on CTV, TSN, and RDS.

TSN digital platforms recorded strong numbers throughout the tournament for both live and on-demand video content, with the FIFA WORLD CUP™ becoming the most-streamed event in the network’s history. Throughout the tournament, TSN digital platforms recorded 7.3 million video starts, with TSN Direct users accounting for 38% of all live stream starts (nearly 1.2 million total). Meanwhile, the England vs. Croatia semi-final was the most-streamed match, with more than 155,000 video starts.