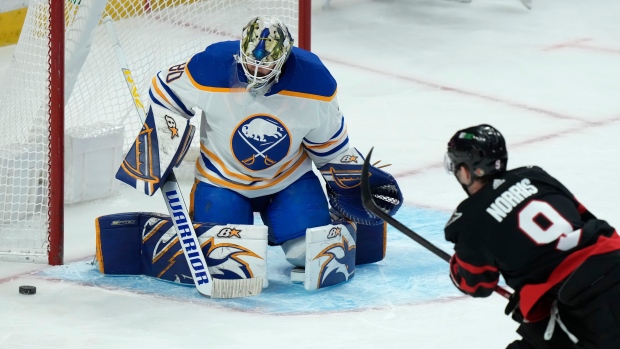 Buffalo’s Aaron Dell has been suspended for three games for Interference on Ottawa’s Drake Batherson. https://t.co/pXXthyGU6h

Batherson is expected to miss significant time after a collision with Dell as he attempted to skate around the net in Tuesday's 5-0 Senators win. Dell appeared to shove Batherson with his right shoulder, who went feet-first into the boards and needed help to leave the game.

The hit from Dell drew the ire of the Senators, who sounded off on the goaltender post-game.

"I thought that play on Batherson was pretty dirty," winger Tyler Ennis said, "the goalie looked like he threw his shoulder into Batherson”

“The frustrating part is he’s done it before and he continues to do it.," head coach DJ Smith said. "It’s interference, (Batherson) wasn’t in the path of the goalie and at the last second he steps in and hits him.”

Senators goaltender Matt Murray also took his counterpart to task for his role in Batherson's injury.

“I don’t like calling out other goalies. But they’re (players) not expecting to get hit by a goalie,” said Murray.  “That’s a dangerous play that turns out to be an unfortunate result - one of our best players goes down.”

Batherson, who scored his 13th goal of the season, played 5:38 in Tuesday's game before exiting. The 23-year-old has already tied a career-high with 34 points this season in 31 games.