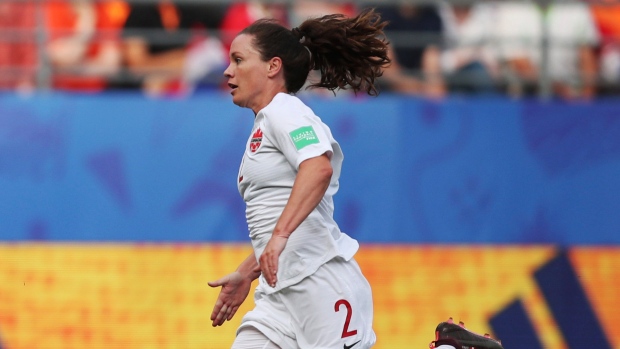 PARIS — Allysha Chapman is a study of perseverance when it comes to playing for Canada.

A former member of the under-20 team, the tenacious fullback from Courtice, Ont., was invited to a senior camp in early 2009 just as Norwegian coach Even Pellerud was giving way to Italy's Carolina Morace.

"She didn't like me. I was part of the 'fat group' in that first camp — we would have to do extra workouts," Chapman said with a laugh. "That didn't quite work out."

Then 20, Chapman had to wait five long years to get back in the national team fold.

While John Herdman took over from Morace after the disastrous 2011 World Cup, Chapman was in her last year at Louisiana State.

"He didn't know who I was. I was asking to get into camps and he wasn't exactly listening."

So Chapman headed to Sweden, where she played three seasons. She sent Herdman some game tape but didn't hear back until the summer of 2014.

"It was unexpected," she confessed. "He had been watching."

The 30-year-old Chapman has been a near constant in the lineup ever since. She made her debut in a 3-0 loss to Japan in October 2014 and has appeared in 67 of Canada's last 77 games. And that despite a hell-for-leather playing style.

Chapman's shoulder separated during a violent collision in Canada's Olympic quarterfinal win over France at the 2016 Olympics in Brazil.

"A couple of injections later and a little tape," she returned to action but was only able to play 30 more minutes. She has a "souvenir bump" from the injury, saying the shoulder still isn't quite the same.

Chapman also went under the needle to keep playing through a torn oblique at the 2015 World Cup, prompting Herdman to call her "hard as nails."

"A little lidocaine," she said with a giggle.

Chapman confesses she normally would have been sidelined with the injuries, but Olympics and World Cups are "special circumstances."

The five-foot-three Chapman is no stranger to going under the radar. Coming out of high school, she was lightly recruited and ended up going to the University of Alabama-Birmingham because she knew some Canadians there.

She garnered more attention after playing at the 2008 FIFA U-20 World Cup in Chile, transferring to LSU where she played from 2009 to 2011, with the Tigers dubbing her "the most decorated defensive standout in the history of the LSU soccer program."

"It's a different world down in the south, for sure, but I enjoyed it," she said of her time in Baton Rouge where she majored in biology. "I made a lot of friends, had a lot of fun."

In France, Chapman was one of the Canadian standouts in the 1-0 win over Cameroon. She saw just 15 minutes of action off the bench in the 2-0 victory over New Zealand as coach Kenneth Heiner-Moller elected to rest her and go with a more attacking formation.

In the 2-1 loss to the Netherlands, Chapman went at it hammer and tongs with dangerous winger Shanice van de Senden.

Canadian forward Nichelle Prince, who plays with Chapman at the NWSL's Houston Dash, calls her an unsung hero.

"I always says she's one of those players you love having on your team and you would hate to play against her ... Her one-vs-one defending is just world-class," said Prince.

Midfielder Sophie Schmidt, another Houston player, calls the fullback "an absolute leader" on the Canadian squad.

"The transformation she's had in her game over the last couple of years has been tremendous. She's such a rock for us. She runs and never stops running ... She may not be stature-wise the biggest but I think she plays with one of the biggest hearts on the team.

"And her technical game has grown so much. She's a huge player for us."

Known as Chappie, Chapman is also one of the most popular members of the Canadian squad not to mention one of the funniest, according to defender/midfielder Rebecca Quinn.

"Chappie has probably the most unique sense of humours I've ever met," said Quinn, saying it can range from dry and sarcastic to crude.

"So I think she works for everyone,' she added. "You never know when she's going to strike. It could be mid-meeting. It could be on the way to a game. She likes to keep it light for our team."

"I just cross my fingers that nobody gets offended sometimes," Chapman said with a mischievous laugh.

Chapman returned to North America in 2015, joining the Houston Dash as one of Canada's allocated players in the NWSL — meaning the Canadian Soccer Association helped pay her salary.

Traded to Boston, she played alongside fellow Canadian Adriana Leon and fell in love with the city. But the franchise folded and she went to the North Carolina Courage in a dispersal draft.

North Carolina, which already had a set lineup, eventually traded her back to Houston where she plays alongside Schmidt, Prince and fellow Canadian international Lindsay Agnew.

"I love it," Chapman said of the Canadian contingent in Houston.

"She's always had a very very good defensive game but she's now adding to her offensive game," he said.

A former striker, Chapman enjoys chances to attack but says one-on-one defending has always been her specialty.

"It's basically the best of both worlds, I get to showcase what I've got," she said of playing fullback.

Her father used to coach her, moving her from forward to the backline against teams with a good forward.

She counts former German international Philipp Lahm and Spain's Sergio Ramos as players she liked to watch although she says Ramos "dives a bit much for me these days."

Relatively new to the squad in 2015, Chapman was under the spotlight with the rest of the team in a World Cup on home soil. She feels less pressure this time in France.

"I wasn't used to all the crowds and the scrutiny that came with your game. I'm just a lot more used to it now, I'd say" she said. "It's nice being in France a little away from it all, so we don't exactly know what's going on back home. It's nice that way. Blissfully ignorant."

Chapman does have her own cheering section here. Her mother is in France for the duration and Chapman's boyfriend, her brother and his girlfriend also took in a game.