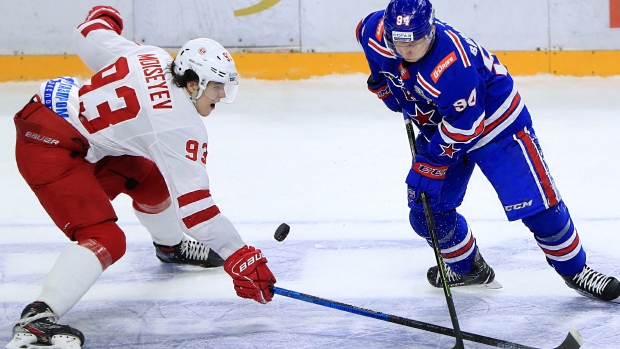 The NHL season may be paused indefinitely, but the Toronto Maple Leafs’ pursuit of KHL free agent Alexander Barabanov has continued to pick up steam.

TSN Hockey Insider Darren Dreger reported that the Leafs and Arizona Coyotes were front-runners for Barabanov’s services, and that both teams had been after him for more than two years.

"He’s going through a process of interviewing teams, and there’s no timeline [on that]," Barabanov’s agent, Dan Milstein, told TSN on Wednesday. "But in another week or less depending [on how things progress], he is going to decide whether to stay in the KHL or come over to North America. There are more than a couple clubs with significant interest."

Until now though, the 25-year-old had been content growing his game in the KHL. Never drafted by an NHL team, Barabanov has spent the entirety of his seven-year professional career with St. Petersburg SKA.

"He's strong. He's not tall (at 5-foot-10), but he's a very strong winger," Dubas said on Tuesday. "Tremendous playmaking ability, great skill level in tight. But one of the other things we like most about him is his ability to make plays under pressure and his ability to win pucks, protect pucks when people come after him and use his strength to be able to do that. So, he's a playmaking winger who also has the ability to finish at the net and we'll continue to pursue him as best we can."​

TSN’s Director of Scouting Craig Button said that in Barabanov, the Leafs would have a player who "works, has desire, and competes pretty well." Button sees him in the same vein as former Maple Leafs' forward Dmytro Timashov, who was a rotating healthy scratch on the team’s fourth line for 39 games this season before being placed on waivers and subsequently claimed by Detroit.

"I don’t think there’s downside to signing free agents like this," Button said. "Barabanov's a bottom-of-the-forward-group type player, so nothing ventured, nothing gained."

Although the global COVID-19 pandemic is preventing Leafs’ personnel from travelling overseas, Dubas said the work put in by senior director of player evaluation Jim Paliafito has already built a solid foundation between the team and players they’re interested in.

That makes it easier to keep expanding those relationships electronically, and the Leafs track record of luring other KHL and European free agents, like Nikita Zaitsev, Calle Rosen and Ilya Mikheyev, boosts their stock as well.

"There are players that we’re interested in and we’re competing with many other teams to try to gain recruitment," Dubas said. "And our hope is that the ability of the players that have come over from Europe since Jim been with us to quickly transition to pro hockey in North America will be a big help for us."

It’s especially imperative now that Toronto be creative in making acquisitions. The Leafs are already pressed right up against the salary cap, and with uncertainty surrounding whether the cap will increase at all next season following the league’s pause, filling out the bottom of the roster with players on manageable entry-level deals is all the more important.

"[Paliafito]’s got a great read early on, on who the players are that we’re probably going to look after," Dubas said. "He does a great job communicating back to the organization and to our player personnel department to take a look at players, whether it’s live or breaking down their video. And then he’s able to begin having conversations with them and their agents during the year to kind of get a handle on it."

Should Barabanov want any insight on the challenges of jumping into North American hockey, he’s got plenty of sounding boards available to help.

Two of Barabanov’s former teammates with SKA – Igor Ozhiganov and Miro Aaltonen – previously spent one season each in the Leafs’ organization, although Aaltonen only suited up for the American Hockey League’s Toronto Marlies.

Barabanov has also represented the Russian national team alongside multiple NHLers, including Alexander Ovechkin, winning Olympic gold with the Olympic Athletes from Russia in 2018 and earning a series of bronze medals (at the 2014 World Juniors, and 2017 and 2019 World Championships).

Those connections could play a key role in pushing Barabanov towards his next destination; one piece of a methodical, long-term process he’s undertaken to make the best choice possible. And he won’t be rushed.

"He’s talking to teams, and him and his wife are considering the interest," Milstein said. "I’m going to continue working with him and looking at different aspects of his options. He could decide at any time. But this isn’t something that all of a sudden came about. He’s been watching a lot of the NHL games and has a lot of friends in the NHL, he played on a line with Ovechkin [with the national team], played with a lot of NHLers in the past. It’s a variety of different things influencing him."