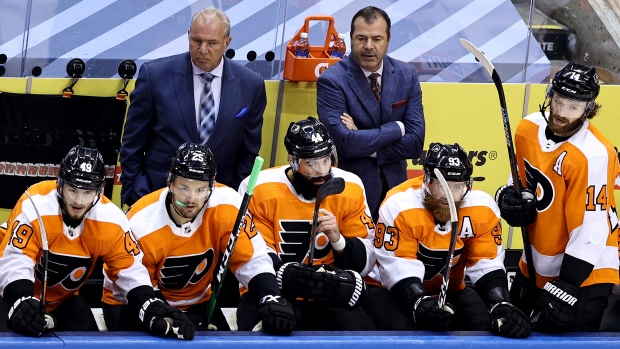 Philadelphia Flyers head coach Alain Vigneault was not happy with Montreal Canadiens coach Kirk Muller after Game 2 of their first round series in the Stanley Cup Playoffs.

The Canadiens won the game 5-0 to even the series 1-1, and Vigneault wasn’t happy Muller played his top power play unit late in the game despite the lopsided score.

"No doubt they outplayed us in all facets, especially in the ‘will’ department. So, we are going to need to be a lot better," Vigneault said post-game. "Saw towards the end of the game there where Kirk Muller, got a 5-0 lead and he puts out his No. 1 power play out on the ice. We had embarrassed ourselves enough. I don’t think we needed to get embarrassed more so I’m going to make sure our team is very aware of that next game."

Muller, who is filling in behind the bench for Claude Julien after the head coach was hospitalized with chest pain Thursday and underwent a procedure, said he meant no disrespect with the move. Muller said the Canadiens’ top power play unit struggled in their Stanley Cup qualifiers series against the Pittsburgh Penguins and they needed the practice.

#Habs Muller, in response to #Flyers unhappiness at Mtl’s 1st PP unit on the ice at 5-0, said he’d never disrespect anybody, but Mtl’s PP wasn’t good vs Pittsburgh and they needed the practice. He wouldn’t reply PP1 during regular season.

*He wouldn’t deploy his number one PP unit in the same situation during the regular season.

Muller added he wouldn't have done the same in a regular season game.