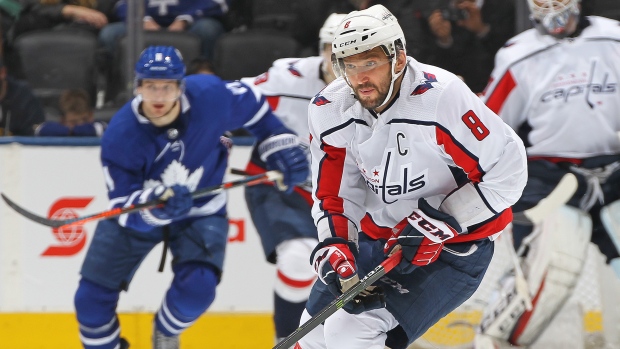 TSN Toronto reporter Mark Masters checks in daily with news and notes on the Maple Leafs. The Leafs (optional) and Washington Capitals (optional) skated at Scotiabank Arena ahead of Tuesday’s game.

It's been an uninspiring first month of the season for the Maple Leafs, who close out their October schedule tonight against the Capitals. Toronto is a young team with plenty of firepower that struggles to play a consistent brand of two-way hockey.

Alex Ovechkin has some advice for them.

“They are still a young group of guys and I hope they’re going to learn,” the Capitals captain said, “but it's up to them how they want to do it and if they want to play for yourself or, if they want to win a Cup, they have to play differently. It’s no doubt."

"There's a veteran player who has gone through it himself, who takes a look over and sees himself," Leafs coach Mike Babcock told TSN. "That's what he went through. Things like that always sting way more when it's right."

Despite producing huge offensive numbers, Ovechkin took plenty of heat throughout his career as Washington struggled to make deep playoff runs. Then, finally, two years ago the Capitals went all the way.

"It helps a lot when your core group of guys stays together and go through that," said Ovechkin. "And you can see it took us four years with Barry (Trotz) to realize what we have to do."

The Leafs are saying all the right things about needing to improve defensively and yet Toronto has still allowed the third-most goals in five-on-five play this season, per the NaturalStatTrick website.

“That’s an area of the game that we have to get better at,” admitted defenceman Morgan Rielly. “…It's up to the players in here to commit to it and just go out there and do it.”

What's the biggest challenge when it comes to improving defensively?

“It's just being consistent,” Auston Matthews said, “doing it every night. It's not easy, a lot of nights you’re going against the top lines, top players, so just making sure you're dialed in that area. It's something I’ve had to improve in, something I’ve still got to improve in. So, you know, it's always a challenge.”

“I think he should call Dale Hunter and ask him advice about it,” joked Ovechkin, who played for the long-time London Knights bench boss during the 2011-12 season. “For me and for (Matthews) and all offensive guys, it's kind of, you know, hard to realize what you have to do on defensive part, but he's still young. He’s going to be a great player and he is right now. It's a good thing he wants to learn and be better.”

Earlier this season, Babcock raised eyebrows by declaring Matthews has the potential to be the best two-way centre in hockey. But, this morning, the coach reminded the media that it's a process.

“Talent is God-given, the rest you’ve got to find," Babcock said. “What you learn in the league over time and you learn sometimes from hard, hard lessons is you’ve got more in the tank. You’ve got more and you can give more. That’s the challenge for him every night. It doesn't make it easy, but I think that's where the fun is at.”

Matthews is in the first year of a new five-year deal with an $11.634-million cap hit, third highest in the NHL. But Babcock doesn't think the contract is putting any additional weight on the Arizona native’s shoulders.

Despite scoring nine goals (tied for third in the NHL), Matthews has struggled to produce in tough matchups of late. On Tuesday night in Boston, he was held in check by the Patrice Bergeron line. Then, on Saturday in Montreal, it was the Phillip Danault​ line keeping Toronto's top unit quiet.

Matthews faces another big test tonight as the Capitals have the 1-2 punch of Nicklas Backstrom and Evgeny Kuznetsov down the middle. The matchup didn't go well for Matthews earlier this month when he failed to hit the scoresheet while seeing a lot of Backstrom in Washington on Oct. 16.

“He’s pretty underrated,” said Matthews of Backstrom. “I’m not sure he’s super underrated anymore, but you got to be aware when he’s on the ice. He’s got really good vision, he skates really well. I think that’s a bit of an underrated part of his game. He can skate really well, create that space and obviously sees the ice well and plays with guys who can put the puck in the net.”

It's not often that Matthews faces a defenceman who has more points than him, but that will be the case tonight when he shares the ice with 21-point man John Carlson. The Capitals rearguard didn't want to talk too much about his offensive exploits this morning instead focusing on the defensive challenge against the 6-foot-3, 220-pound Matthews.

“He’s a dangerous player,” Carlson said. “Speed, skill, and I think he’s kind of underrated with how powerful he is and how many goals he scores around the net. It’s not easy being around the net in this league and he's certainly made a name for himself down there. He’s really a threat all over the ice, which makes him unique.”

It’s normal to hear Backstrom called underrated, but not Matthews, who plays, of course, in the centre of the hockey universe. So, Carlson was asked to expand.

“Just how strong he is,” Carlson explained. “I mean, he’s got a knack for getting to the right spots. He's hard to take off the puck and hard to move from the front of the net.”

“The one thing that's probably not talked about enough with him is the role he’s taken on our team this year,” the Capitals coach pointed out. "We lose two major leaders in Brooks Orpik and Matt Niskanen and now we have John Carlson back there. Not that John didn't play the most last year when they were there, but his leadership responsibilities are totally different this year. We decided to give him the A on his jersey this year and he’s done an excellent job with our young defencemen and that’s something that's a little bit underrated about him. Those are things you don't see behind the scenes.

Travis Dermott makes his season debut tonight. It’s been a long road back for the defenceman who underwent shoulder surgery in May.

“Where I’m at now, that's all behind me and I can move forward and forget about that,” said the 22-year-old.

Dermott spent most of the rehab process attached at the hip with Zach Hyman, who underwent off-season knee surgery.

“He’s a guy who pushed me a lot over the time and hopefully I did a little bit of the same for him,” Dermott said with emotion in his voice. “But I hope he knows how much I really needed him this past little bit, how much he was there for me.”

“I love playing with Hollsy. We’ve been able to grow our chemistry on and off the ice here and being able to make my comeback here with him by my side, that’s pretty special for me.”

“Let's keep everything in perspective here,” the coach warned reporters. “Dermy hasn't played since when? Okay, he’s missed all of training camp, you know what I mean? He was injured the second half of last year and even came back in the playoffs and wasn’t healthy. So, this is a new start for Dermy. We’ve talked to Dermy about that and let's just play simple. Let’s just get out there and play simple. Let’s keep it out of our net. Then we’ll just build our game as time goes on.”

With Dermott returning, the Leafs are down to two key players in sick bay: Hyman and John Tavares (broken finger). Neither is expected back by Saturday's game in Philadelphia.

"I think John's going to be ready before Hyms from what I know," Babcock said.

Justin Bieber was at Friday's game at Scotiabank Arena sitting behind the Leafs bench and wearing a No. 34 sweater.

“It’s pretty sweet,” said Matthews. “I think he's coming tonight, too. It's cool having guys like that be big fans of the team and support our team and, obviously, him being from here and him being who he is, it's pretty awesome to see.”

Matthews met Bieber once, but doesn’t know him all that well. Is he a fan?

“Yeah, I am,” Matthews said with a smile. “He hasn't really come out with something recent, an album or anything, but he’s talking about bringing one out before Christmas so we'll see.​