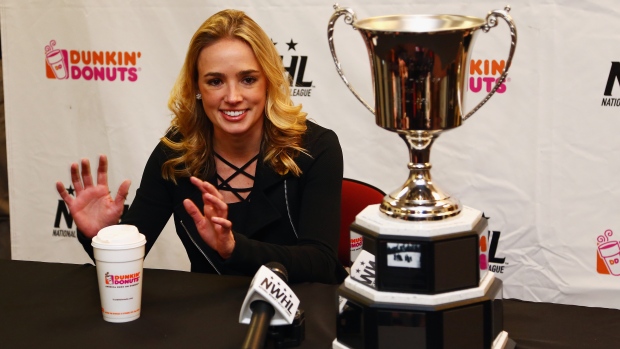 The U.S.-based National Women’s Hockey League is in the process of establishing an expansion franchise in the Toronto area, a person with direct knowledge of the plans told The Associated Press.

The team will be headed by Margaret “Digit” Murphy, and the former Brown University coach already has begun building a roster of players, the person said. The person spoke to the AP on condition of anonymity Tuesday because the NWHL isn't expected to announce its plans until the end of the month.

League spokesman Chris Botta declined to comment except to say, “The NWHL does not have announcement to make at this time.”

The Toronto-area team would be the NWHL’s first in Canada and increase the league’s number of franchises to six, joining teams in Boston; Monmouth Junction, New Jersey; Danbury, Connecticut; Buffalo, New York; and Saint Paul, Minnesota.

Ontario Women's Hockey Association president Fran Rider told the AP last week only that she has been in contact with the NWHL. The OWHA oversees the women's sport in the province by providing sanctioning rights to teams and leagues, in part for insurance purposes. A team does not have to be sanctioned by the OWHA to compete.

The NWHL was established in 2015 as startup venture by Dani Rylan and backed by private investors, becoming North America’s first women’s league to pay its players a salary.

The bid to expand across the border comes a little over a year since the six-team Canadian Women’s Hockey League folded after 12 seasons due to financial issues.

The NWHL initially expressed interest in expanding to Toronto and Montreal a year ago, but those plans failed to materialize.

The NWHL also met a roadblock last spring when more than 200 of the world’s top players vowed not to play professionally in North America in the wake of the CWHL’s demise. The players — including members of the U.S. and Canadian national teams — then formed the Professional Women’s Hockey Players Association to demand establishing a league with a sustainable, long-term economic model.

PWHPA executive member Jayna Hefford said she was aware of and welcomed the NWHL’s expansion bid, even though it doesn’t fit her association’s long-term objective.

“We think this is an opportunity that’s going to be provided for some women to play hockey at that level,” Hefford said. “But it’s not the opportunity that we’re looking to provide and the professional league that we want to create.”

The NWHL was unable to complete its season after postponing its championship game due to the coronavirus pandemic. Boston was scheduled to host Minnesota in the Isobel Cup Final on March 13.

It’s unclear exactly where the Toronto-area team would be based. It's also unclear what medical insurance players would receive, given they would play at least half of the season in the United States, where laws differ from those in Ontario.

The person said the team’s backers would include Miles Arnone, who last year purchased the NWHL’s Boston Pride, and Johanna Boynton, the CEO and co-founder of Boynton Brennan Builders in the Boston area. Boynton was a two-time captain of Harvard’s women’s hockey team in the 1980s and is a longtime supporter of the sport.

Murphy spent 18 years coaching at Brown, where she finished with 318 wins, then an NCAA women's ice hockey record. She eventually joined the CWHL as coach and GM of the league's Boston Blades. Murphy then spent the 2017-18 season as head coach of the CWHL's China-based Kunlun Red Star franchise.