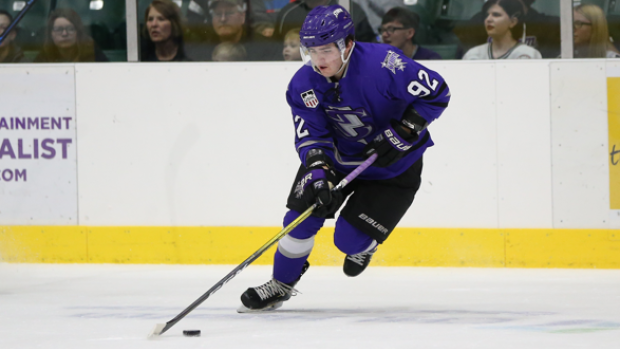 The Arizona Coyotes say that they will work with prospect Mitchell Miller “to confront bullying and racism” after reports surfaced that their top 2020 draft pick was convicted of bullying a Black classmate with developmental disabilities four years ago.

According to a story published by Craig Harris and Jose M. Romero of The Arizona Republic on Monday, Miller and another teen were charged with assault and violating the Ohio Safe Schools Act in 2016 after they were accused of making Isaiah Meyer-Crothers eat candy that was in a urinal.

A police report obtained by The Republic states that Miller and the other teen pushed and punched Meyer-Crothers and that Miller lied to school officials about his involvement.

Meyer-Crothers says Miller taunted him for years with racial slurs, calling him “brownie” and the “N-word” and repeatedly hit him. "It hurt my heart to be honest," he told The Republic after learning Miller was drafted. "It's stupid that they (Coyotes) didn't go back and look what happened in the past, but I can't do anything about it."

Miller and the other teen were sentenced to 25 hours of community service and were ordered to write an apology through the court system to Meyer-Crothers, participate in counseling and pay court costs.

The Coyotes selected Miller in the fourth round (111th overall) of the draft on Oct. 7.

According to The Republic, the team did not make senior management available to comment on why they drafted Miller, but issued a statement from Team President and CEO Xavier Gutierrez outlining that they knew about the incident prior to drafting him and are working with him.

“Our fundamental mission is to ensure a safe environment - whether in schools, in our community, in hockey rinks, or in the workplace - to be free of bullying and racism," Gutierrez said in the statement, per The Republic. "When we first learned of Mitchell’s story, it would have been easy for us to dismiss him - many teams did. Instead, we felt it was our responsibility to be a part of the solution in a real way - not just saying and doing the right things ourselves but ensuring that others are too.

“Given our priorities on diversity and inclusion, we believe that we are in the best position to guide Mitchell into becoming a leader for this cause and preventing bullying and racism now and in the future. As an organization, we have made our expectations very clear to him. We are willing to work with Mitchell and put in the time, effort, and energy and provide him with the necessary resources and platform to confront bullying and racism. This isn’t a story about excuses or justifications. It’s a story about reflection, growth, and community impact. A true leader finds ways for every person to contribute to the solution. We all need to be a part of the solution.”

Gutierrez was named the Coyotes’ new president and CEO in June and was also named last month to the NHL’s Executive Inclusion Council, a committee created to focus on stopping racism and fostering diversity in the game.

Coyotes GM Bill Armstrong added that Miller, who now attends the University of North Dakota, sent out a letter to every NHL team acknowledging what happened and has apologized for it.

The Coyotes also sent out a statement from Miller on Friday.

“I am extremely sorry about the bullying incident that occurred in 2016 while I was in eighth grade,” the statement read, per The Republic. “I was young, immature and feel terrible about my actions.

“At the time, I did not understand the gravity of my actions and how they can affect other people. I have issued an apology to the family for my behavior, completed cultural diversity and sensitivity training and volunteered within my community with organizations such as Little Miracles. Over the past four years, I have had a lot of time to reflect and grow and I am very grateful to the Arizona Coyotes for taking a chance on me. I promise not to let them down. Moving forward, I want to be a leader for this cause and help end bullying and racism.”

The University of North Dakota has also acknowledged that they knew about the incident, as well as USA Hockey and the USHL’s Tri-City Storm, where Miller played last season.

Meyer-Crothers’ mother Joni told The Republic that aside from the court-appointed letter, Miller has never personally apologized to her son nor did the Coyotes contact their family.

"What they (Coyotes) are saying is what Mitchell did to him didn't matter," she told the paper. "They owe our son an apology.

“They are not part of the solution. They are part of the problem and they are adding fuel to Black Lives Matter."

Files from azcentral.com (The Arizona Republic) were used for this report.