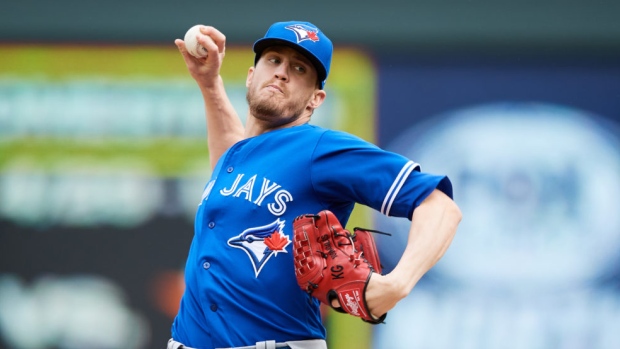 TORONTO — The Toronto Blue Jays finished off some paperwork Friday, agreeing to one-year deals with all three of their arbitration-eligible players.

With a noon deadline looming for clubs and agents to exchange salary figures, the Jays were able to sign closer Ken Giles and starter Matt Shoemaker, while Brandon Drury agreed to terms Thursday evening.

After going to arbitration with Ryan Tepera last year and Marcus Stroman in 2018, the Jays will avoid a hearing room in February altogether this time around.

Not only did the 29-year-old right-hander register a sparkling 1.87 ERA with 23 saves for a 67-win ball club, Giles was also the 10th most valuable qualified reliever in all of baseball by fWAR, with a 1.8 mark.

In 12 less innings, that figure even bested the man he was traded for, Houston Astros closer Roberto Osuna, who was worth 1.6 fWAR in 2019.

Now the question becomes, how long does Giles wear a Blue Jays uniform?

The closer, himself, has talked openly about his desire to stay in Toronto via a contract extension, and while the Jays and GM Ross Atkins haven’t ruled that out, his trade value over the coming weeks and months leading into the trade deadline will have a say in that.

If Giles, who dealt with a mysterious elbow issue last season, is healthy, pitching well, and the Jays are presented with an offer they can’t refuse, he’s likely on the move.

But if the Jays show signs of being closer to contention than many expect, there could be a desire to keep one of the premier relievers in the American League around a little while longer.

Closers on rebuilding teams are a luxury — and usually great trade chips — but no one is really sure where this club will sit in 2020 or even 2021 at this point.

He’s expected to serve as the team’s No. 3 or No. 4 starter, health permitting.

The 33-year-old already starting throwing off a mound last fall and his left knee is expected to be 100 per cent when pitchers and catchers report to Dunedin on Feb. 13.

After slashing just .218/.262/.380 last season, Drury, who has an option remaining, will have to make the club first, or he could be earning that salary at Triple-A Buffalo to start the year.