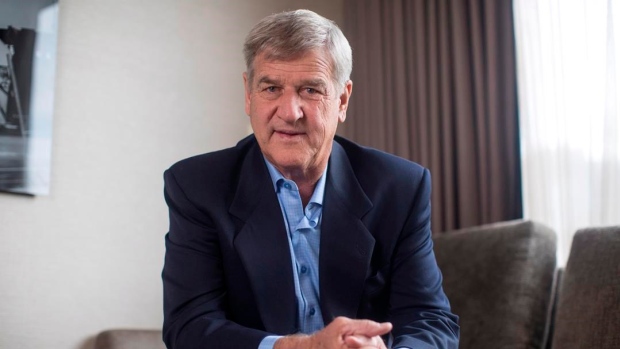 TORONTO — Bobby Orr doesn't like the look of the NHL labour clouds forming on the horizon.

In fact, the Hall of Fame defenceman says he fully expects another lockout in the not-too-distant future.

"My gut feeling is I'd be surprised if there's not," Orr said in an interview with The Canadian Press this week. "I hope there isn't.

The league and the NHL Players' Association signed a 10-year collective bargaining agreement in January 2013 to end the last lockout, but both retain the right to cancel the deal after eight seasons.

Notice from either side under that scenario has to come by next September, which would give the parties 12 months to hammer out a new deal before the old pact expires prior to the 2020-21 season.

If the league and its players both decide to let the current CBA run its course, it would expire before the 2022-23 campaign.

Issues include escrow payments that see a percentage of player salaries held in trust to ensure an even split of revenues with owners, and participation at the 2022 Olympics in Beijing. The NHL declined to send its stars to the 2018 Winter Games in South Korea after taking part in the previous five showcase events.

Another lockout in 2004-05 wiped out the NHL entire season.

NHLPA executive director Donald Fehr said before the start of this season it was, "no secret the players made enormous concessions to the owners in the last two negotiations."

"There's a general sense (among union membership) that it would be appropriate for the scales to move back in the other direction a bit," Fehr said in a September interview. "We will see."

The 70-year-old Orr — who was in Toronto promoting his new book "Bobby: My Story in Pictures" — heads a hockey agency that bears his name and boasts Edmonton superstar Connor McDavid among its clients.

He's hopeful the players and owners can come to an agreement before there's another work stoppage, especially with the young talent in the game and potential expansion to Seattle as the NHL's 32nd franchise, but added he's not holding his breath.

"I think there are concerns (with the current CBA) on both sides," Orr said. "I hope I'm wrong. We don't need a lockout.

"We've got it going now. It would be a shame to put it on the back burner."