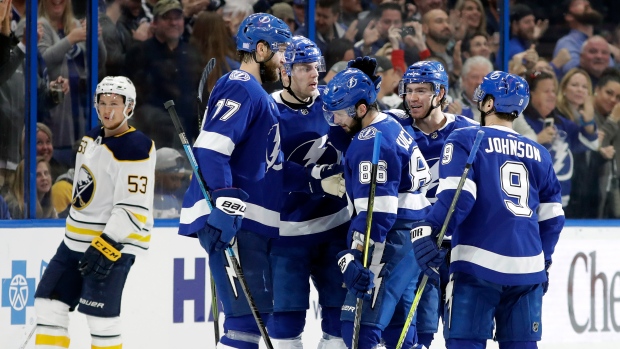 TAMPA, Fla. — The Buffalo Sabres came up just short of a history-making run.

Cedric Paquette broke a tie with 5:41 left and the Tampa Bay Lightning ended the Sabres' franchise-record-tying winning streak at 10 games with a 5-4 victory Thursday night.

"I thought it was great stretch by us, 10 games in a row," Buffalo star Jack Eichel said. "It shows us we can win every night we go out there, and I think that should be our mindset no matter what. That's the confidence you build through a winning streak like that."

Paquette beat Carter Hutton, who had won his previous eight starts, from the top of the left circle.

Ten of the Sabres' last 11 games have decided by one goal, including seven that needed extra time.

Buffalo also had 10 consecutive victories in January 1984 and October 2006.

"I thought there was a lot of momentum in that game," Tampa Bay coach Jon Cooper said. "Both teams coughed up leads. There was a ton of swings in that game. I'm pretty sure if you're a fan of hockey and were in the building tonight you would have enjoyed that one."

The Lightning took over the top spot in the Eastern Conference and hold a one-point advantage over the Sabres and Toronto.

"It was kind of a playoff atmosphere," Girardi said.

"It definitely would have been nice to pull this out," Girgensons said.

Buffalo pulled even at 3 when Eichel's pass from the left wing boards into slot went off Reinhart's skate at 5:39 of the second.

Eichel had two assists, giving him 25 this season.

Kucherov put the Lightning up 3-2 from the slot during a 3-on-1 with 4:05 left in the first. The right wing also had an assist, and has an eight-game point streak (three goals, 17 points). He set career high for points in a single month with 23.

After Girardi opened the scoring, Girgensons and Reinhart scored 63 seconds apart midway through the first. Killorn knotted it at 2-all just 43 seconds after Reinhart's goal.

Girardi couldn't put any weight on his right leg after a collision with Thompson five minutes into the game but returned 10 minute later.

"I got pretty lucky," Girardi said. "My knee really hurt but just a little bump. The pain went away."

Tampa Bay defenceman Ryan McDonagh went to the locker room at 11:50 of the first after being hit at the end boards by Eichel, who received a two-minute boarding penalty.

Cooper had no postgame update on McDonagh, whose status will be evaluated Friday.

Sabres defenceman Jake McCabe departed in the second with an undisclosed injury.

NOTES: Sabres LW Jeff Skinner had a four-game goal streak end. He had one shot on goal. ... Lightning LW Ondrej Palat (foot) returned after missing 16 games. ... Tampa Bay D Anton Stralman (upper body) sat out his 10th consecutive game and will be re-evaluated next week.... Sabres D Marco Scandella (undisclosed) and LW Conor Sheary (upper body) were both out of the lineup but could play this week. Buffalo D Matt Hunwick (neck) has resumed practicing with the team.

Sabres: At Florida on Friday night.

Lightning: At Florida on Saturday night to start a three-game trip.