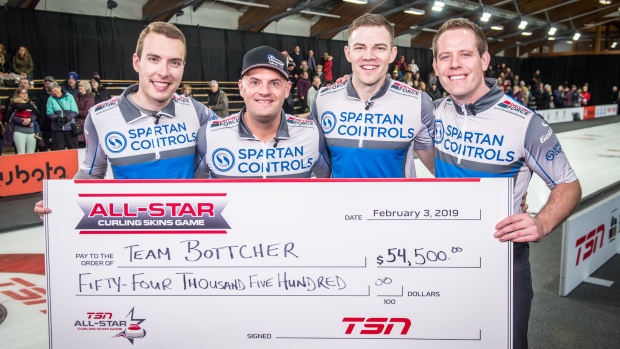 Ahead of next week’s Alberta playdowns, Brendan Bottcher edged provincial rival Kevin Koe with a draw to the button shootout and a $43,000 to $14,000 win in the TSN Skins Game men’s final from Banff.

"That was one great game. I felt like we were a little nervous early, but the last six ends we played well. When we needed a big shot at the end we had it. That's such a good feeling," Bottcher told TSN.ca.

Defending champ Koe opted to strategically pass the first end hammer to his opponent, and the two skips put on a draw clinic in the first end. Koe ultimately forced Bottcher to best his draw to avoid what would have been a Koe steal.

Koe dominated the second end, scoring four points and the skin to take an early $4,000 lead.

Bottcher could only salvage the carryover in the third end, when his shot over-curled after picking the Koe stone off the button. Bottcher responded with a Hail Mary runback in the fourth, giving Koe a very difficult tap that he barely missed, giving Bottcher a $6,000 steal.

Koe retook the lead with a delicate out-turn tap back in the fifth, sealing the skin and $4,000.

Bottcher narrowly missed a difficult double raise takeout in the sixth, resulting in a Koe steal worth $6,000 that, more significantly, cost Bottcher the eighth-end hammer.

"In skins, there are so many opportunities every end. It feels like you have the hammer and you should be safe, but it's not quite the case," said Bottcher.

Koe's uncharacteristic miss on a bullet-weight double in the seventh opened the door for Bottcher's easy takeout to score the $9,000 skin.

With $28,000 and the title on the line in the eighth, the two teams played to a single point for Koe, causing a carryover and a draw to the button for the win. Bottcher went first, and his throw was an absolute bulls-eye that Koe couldn't quite match.

"I thought my shot in the sixth was makeable and I was beating myself up a bit that I missed one of the easy ones. But we bounced back and played a great seventh end. In eight, Kevin made an outstanding shot on his first one. Ben swept that as good as I've seen anyone sweep a curling rock,” said Bottcher. “In the back of our minds, we sorta [thought] a steal would be great, but a carryover would be good too. I feel like we're a good draw team. Give us a chance and the guys will put it pretty close."

This was the Edmonton’s rink first appearance at the TSN Skins Game and Bottcher says he loved every second of it.

"It's been a blast, on and off the ice. This is just a top-notch event, from start to finish. And on Tuesday we're off to our Alberta provincials,” said Bottcher. It's a quick turnaround, and I'm sure there will be more battles with Team Koe that week. Hopefully we keep playing well, and you see us at the Brier."