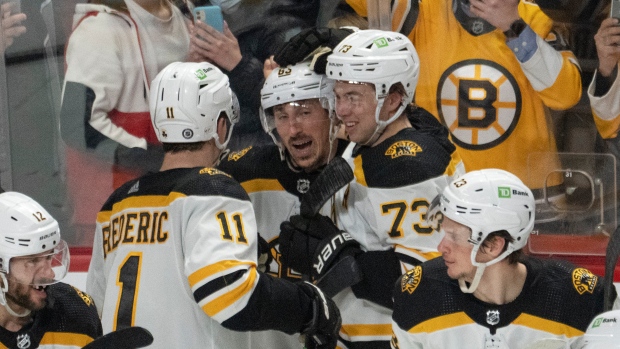 MONTREAL — Brad Marchand won’t hold the memory of an overtime game-winner at the Bell Centre too close to his heart. Instead, he’s just happy that his Boston Bruins came back to win 3-2 in overtime against the Montreal Canadiens.

Boston fell behind 2-1 in the second period when Marchand turned the puck over with a pass towards Charlie MacAvoy and let Joel Armia score a short-handed go-ahead goal on a breakaway.

Connor Clifton sent both teams to overtime with just under three minutes to go in regulation. Marchand ended the contest by fooling Jake Allen to grab the win in the first meeting between the eternal rivals at the Bell Centre in 864 days.

“I was just really happy that we didn't lose because of that turnover,” Marchand said. “I kind of owe the group there and it felt good to be able to bounce back and produce in that situation after making such a bad play.”

“It's embarrassing when you make plays like that you feel like you let the whole group down and it's tough to be on that side of it so to be able to bounce back from it, it was nice.”

The winger added that he didn’t like Allen’s reaction after robbing him of a power-play goal at the very end of the second period. The Habs netminder had a stellar 43-save outing but Marchand had the last laugh by swerving around him to ice the game in overtime.

“I kind of knew it was going to come back just because of the way he kind of showboated on the save at the end of the second,” Marchand said. “I had to add a little extra on that one because that save so luckily we won.”

Bruins coach Bruce Cassidy said that his team reminds newer players about what playing the Canadiens means to both clubs.

“These are games that our fanbase gets jacked up about so it deserves a little more than playing another team,” Cassidy said. “So let's make sure that we're focused, on time and ready.”

Canadiens interim coach Martin St. Louis was proud of what his team left on the ice playing in the aftermath of trade deadline day. General manager Kent Hughes had traded away Artturi Lehkonen, Brett Kulak and Andrew Hammond hours prior and the Canadiens kept a close game against their rivals.

In his fifth week as Habs coach, St. Louis learned that waiting for the 3 p.m. ET deadline also has an effect on the man behind the bench.

Jeremy Swayman stopped 26 of the 28 shots sent his way.

The Bruins broke the ice following a Canadiens turnover at 9:21 of the first period. Erik Haula sent the puck over to Marchand in the crease who tapped in his 26th goal of the season.

Savard levelled the score on a delayed penalty advantage in his first game back from an ankle injury when his backhand shot from the high slot deflected off of Derek Forbort and past Swayman.

Alexander Romanov was called for tripping, giving the Bruins a power play in the final seconds of the second period. Marchand tried to send both teams to the second intermission with a one-timer but Allen robbed him of a goal with a glove save.

The Canadiens made Boston pay with a short-handed goal at 1:13 of the third. Armia intercepted Marchand’s pass to MacAvoy and scored on a breakaway.

Clifton threw a cold shower on the Bell Centre by tying the game 2-2 at the 17:01 mark in the third period. The 26-year-old controlled Craig Smith’s pass with his skate before beating Allen, forcing overtime.

The Bruins sent everyone home only 34 seconds into the overtime when Marchand fooled Allen to ruin his impressive outing and grab the comeback win.