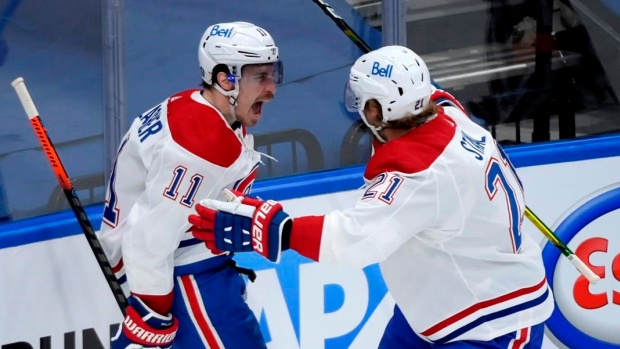 When the Montreal Canadiens faced elimination for the first time this season, way back on May 27 against the Maple Leafs in Toronto, something clicked.

"Since that Game 5 against Toronto, we've just been kind of playing that same way, nothing to lose, leave it all on the line," said winger Brendan Gallagher, "and game after game come with the same effort and energy."

Just like the Maple Leafs were, the Golden Knights are favoured to beat the Habs. Vegas finished second overall in the league standings and just knocked out the top-seeded Colorado Avalanche.

"There's certain expectations on their side and the longer this series goes, the more the pressure falls on them," Gallagher noted. "As the series goes on, we get more and more comfortable in these situations and we're looking forward to it. We've shortened it to a best of three."

The Knights, though, have regained home-ice advantage with Game 5 and Game 7, if necessary, set to take place inside a sold out T-Mobile Arena where Vegas has won five of the last six games.

"We can't wait to see Tuesday at 'The Fortress' and how it's going to be and feel the energy of the crowd and go from there," said Knights winger Jonathan Marchessault.

The Canadiens came out strong in Game 1, but then struggled to regain momentum after the Knights opened the scoring and fired up their 'Medieval Maniacs.'

"We know what it's going to be like," Gallagher said. "An electric atmosphere and they definitely feed off their fans, but we've experienced it. We're going to be more and more comfortable and, obviously, this Game 5 is as important as a game gets."

Montreal is 6-2 on the road in the playoffs and stole Game 2 in Las Vegas.

"I've always been told, since you're a young kid, good teams win at home, great teams find a way to win on the road in tough environments," Gallagher said. "It's not always easy, but that's where a character of a team is able to show and, for us, we just kind of enjoy the challenge. We're able to kind of settle into our game and we seem to understand the style of hockey you need to play."

Gallagher is still looking for his first point of the series, but he did fire five shots on net on Sunday, which was his highest total in this year's playoffs.

"Brendan had one of his best games yet," said assistant coach Luke Richardson, who is running Montreal's bench with interim head coach Dominique Ducharme isolating following a positive COVID test. "He had some good chances. He's always going to be around that crease so a matter of time before a puck or a rebound is loose there. [That line] created some speed through neutral zone much better last game and had some chances off the rush. Robin Lehner, give him credit, there wasn't a lot of rebounds, especially in the second half of the game, that spit out there so that's what we got to create."

Richardson is quick to point out that the Gallagher line, which also features centre Phillip Danault and Artturi Lehkonen, is doing an excellent job shutting down Vegas' top line, including Max Pacioretty and Mark Stone.

The Knights have only gotten three goals from their forwards in the series (two from Nicolas Roy and one via Mattias Janmark) and none from the top-six group.

"It's great we tied the series yesterday, but at some point the big guys are going to have to step up here, including myself," acknowledged Marchessault, who has just five shots in the series. "It's not good enough with the forward group we have to have only three goals in four games. Obviously, we're facing an unbelievable goalie, but that's no excuse ... We got to find a way. We don't have any excuses. We need a solution ASAP."

Chandler Stephenson has missed the last three games with an upper-body injury, which has slowed the Knights attack and led to a revolving door down the middle of the ice.

"We've played, basically, this series without our No. 1 centre so far," said coach Peter DeBoer. "Obviously, want to get him back in the lineup and I think that's on the horizon ... You take somebody like that out of anybody's lineup and it effects your team ... That changes the way your team plays. It changes the structure of your team and your depth and, to our guys' credit, we've found a way. It hasn't maybe looked as pretty as everyone would like it to look, but we found a way."

The defence has certainly picked up the pace. Five Knights defencemen have a goal in the series with Brayden McNabb joining the party with a crucial tying tally on Sunday.

"There's lots of talk about forwards not scoring, but they're creating opportunities, creating those plays and allowing us to score those goals," said Alex Pietrangelo, who has three goals in the series.

The strong relationship between Marc-Andre Fleury and Lehner made Sunday's goalie switch an easy transition for the Knights.

"There's difficult decisions being made, but to see the camaraderie between these two guys, the way they help each other throughout games, in between games, it's pretty impressive," observed Pietrangelo. "When you have two guys who have played as No. 1 guys it's about finding that balance and they have. That relationship is just as good on the ice as it is off the ice."

DeBoer made the switch, because he says he sensed the 36-year-old Fleury was getting a bit fatigued. He stressed it's important to maximize the team's depth.

"It's been the story of our season and the story of our playoffs," DeBoer said. "If you look at the number of guys we've used both up front and on defence and now in net, and the number of contributions from those guys either on the scoresheet or in other ways, it's the reason we’re standing here. It's the reason we got through the deepest team in the league in Colorado. So, you know, that's what we're about."

The Golden Knights have been on the power play 11 times in the series while the Canadiens have been on the man advantage just six times. Gallagher was asked if he's confused by the standard of officiating in the playoffs.

"You're asking that question for a reason," he said. "Everyone's been watching the games. We talk so much about controlling the controllables and, for us, all we can worry about is ourselves."

"You can sit here and complain on one play or another, but if the standard is the same on both sides then it's fair for both teams and that's the way it was last night," Pietrangelo said. "It was like that in previous games so as long as they're calling it the same way for both teams I think we understand what the standard is throughout the game."

Players on both sides agree that the referees are letting more go in the playoffs. There was only one power play per team on Sunday.

"Both sides will be disappointed with some calls," said Marchessault. "Will Carrier got crushed in the first period there in the corner and he's not a little guy. There's stuff they're going to let go ... It's adversity teams need to face in the playoffs and good teams will find a way to go through it. I look at two years ago, San Jose won Game 3 against St. Louis with a hand pass in overtime. I thought that was an awful situation, but St. Louis faced adversity there and came back and won three straight."

The lack of calls adds even more importance to every power-play opportunity you do get. So far the Canadiens have the only power-play goal in the series.

"In the regular season you're getting maybe four or five so that first one, if it's a little sloppy, you know what to work on," said defenceman Jeff Petry. "It's on us to make sure on that first one we're sharp and we know what they're going to do and we're prepared and moving the puck crisp, because in playoff hockey you're not getting those chances to learn on the fly and get things going on a second or third opportunity."

The Knights are scheduled to skate at City National Arena on Tuesday morning in Las Vegas. The Canadiens will be on the ice at T-Mobile Arena.