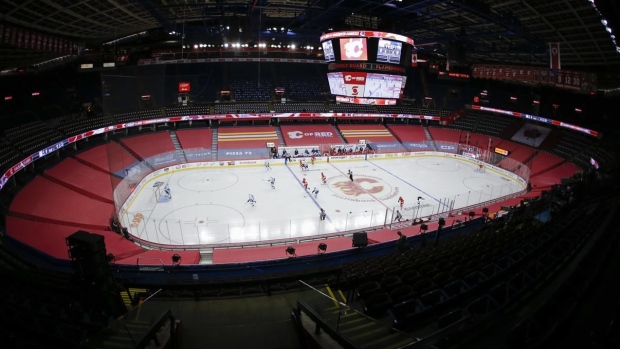 CALGARY — The Calgary Flames organization has filed a lawsuit against its insurers alleging $125 million in losses due to the COVID-19 pandemic.

The National Hockey League halted its season in March 2020 because of the virus, which resulted in the Flames playing a reduced number of games without fan attendance.

The statement of claim, filed March 10, alleges the Flames suffered "massive losses" without the ability to host fans, while racking up spending to ensure an eventual safe return to the stadium.

It says repairs and preventive measures included the installation of physical barriers, upgrading its air ventilation system and creating a COVID-19 screening application for non-player personnel.

"The presence of COVID-19 and the COVID-19 virus in the Saddledome during NHL games made the normal use of the Saddledome impossible for almost two years," the claim states.

"The purpose of this arena is to allow thousands of fans to gather inside to watch events, consume food and beverages and vocally cheer on sporting or other events."

The claim says the insurers have denied coverage to the Flames and not reimbursed any money due to the losses.

None of the allegations have been proven in court and statements of defence have yet to be filed.

The lawsuit says fan attendance is the "lifeblood" of the organization's revenue. In the year before COVID-19, it says hockey games and other live events brought more than $187 million to the Flames.

“These covered perils include known and unknown risks, including noxious substances that render arenas unusable," says the lawsuit.

"COVID-19 and the COVID-19 virus were precisely among the perils and risks covered."