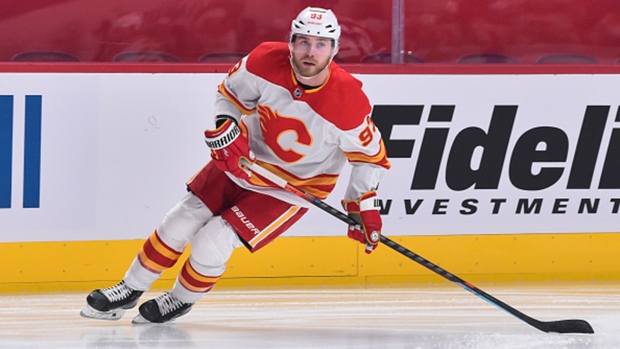 CALGARY — The Calgary Flames jettisoned the highest draft pick in team history when Sam Bennett was dealt to the Florida Panthers on Monday.

The 24-year-old forward and a sixth-round draft pick in 2022 went to the Panthers, with a second-round pick next year and Swedish prospect Emil Heineman going to Calgary.

"He's a real good kid, but you also have to make business decisions," Treliving said on a media conference call Monday.

"Sam worked hard here. That was never the issue, but I think he's going to embrace a fresh start and we wish him all the best."

Heineman was a second-round pick of the Panthers last year. The 19-year-old winger has seven goals and six assists in 43 games this season for Leksand in the Swedish Elite League.

Bennett was the second player to leave Calgary in the hours before Monday's trade deadline.

Calgary (17-21-3) was six points out of the fourth and final playoff spot in the North Division with 15 games remaining heading into Monday night's play.

"We felt we got real good return, but we're not throwing the towel in on the year," Treliving said.

"I'm not about to do autopsies on the corpse here. We've got lots of hockey left to go.

"We felt if we were going to make these moves, those moves wouldn't be available to us beyond today.

"I wouldn't necessarily define it as you're just buying, you're just selling. I had a hand in both pools here today. This is what transpired."

Bennett, who is headed for restricted free agency this summer, would likely have been exposed in the expansion draft for the Seattle Kraken.

The six-foot-one, 195-pound forward compiled 67 goals and 73 assists in 402 games for the Flames, and had four goals and eight assists in 38 games this year.

Bennett had five goals and three assists in 10 playoff games for the Flames last summer.

His agent indicated in January that Bennett was unhappy with his situation in Calgary.

"We dealt with the issue earlier in the year," Treliving said. "I've got a good relationship with Sam, think a lot of young man. We had a long discussion today.

"I think if you could do things over in life, I know I've probably got a few re-dos out there. Probably everybody does. It probably could have been handled a little bit differently. I don't put that on Sam."

Bennett played both centre and wing for the Flames, but wasn't able to garner sustained time among Calgary's top six forwards over seven seasons.

His most productive season was his second with 18 goals and 18 assists in 77 games.

Rittich is headed for unrestricted free agency after this season. Treliving expected the 28-year-old Czech to put himself on the market.

When the Flames signed Jacob Markstrom to a six-year, $36-million contract last October, Rittich became the clear backup after two seasons as a tandem with first Mike Smith and then Cam Talbot.

"Good goalie, but happy with the return," Treliving said.