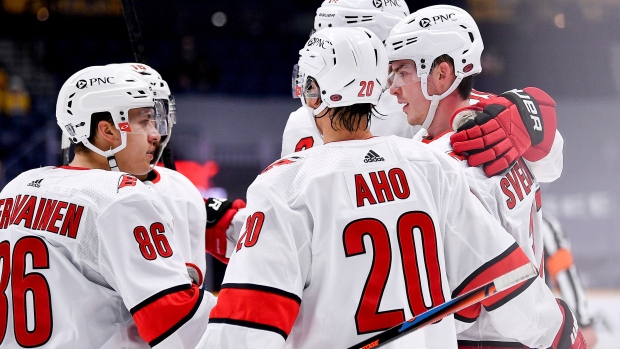 NASHVILLE — Andrei Svechnikov, Sebastian Aho and Vincent Trocheck each had a goal and an assist as the Carolina Hurricanes beat the Nashville Predators 4-2 Monday night.

Viktor Arvidsson had a goal and an assist and Filip Forsberg also scored for Nashville.

After Nashville’s Rocco Grimaldi turned the puck over inside the blue line, Trocheck skated to the high slot and fired a wrist shot high to the far side of Nashville goaltender Pekka Rinne at 3:46 of the third to put Carolina up 2-1.

“He’s a competitor, I’ve said that since day 1,” Carolina coach Rod Brind’Amour said of Trocheck. “We’re using him on everything right now. Obviously, that was a huge goal.”

Just after the midpoint of the third, Jake Gardiner broke up a solid Nashville scoring chance and then sent a breakout pass to Svechnikov to create a 2-on-1 with Aho, who was able to beat Rinne off of Svechnikov’s cross-slot pass.

“We played last year, all the year together,” Svechnikov said of Aho. “We got some chemistry from last year. (I) know where he’s going to be and he knows where I’m going to be and that makes it easy on us.”

Arvidsson cut Carolina’s lead to 3-2 at 13:26 of the third with a power-play goal, Nashville’s first of the season.

“I think we were dangerous every time we stepped on the ice,” Arvidsson said of his linemates Ryan Johansen and Forsberg. “I think we had an attack mindset and we found each other really well.”

Svechnikov scored the game’s first goal at 16:05 of the second period. With the Hurricanes on a power play, Svechnikov fired a wrist shot from above the left circle by Rinne on the short side.

The Hurricanes have scored a power-play goal in each of their three games this season.

Forsberg answered 46 seconds later. From deep in the Nashville zone, Dante Fabbro sent a stretch pass toward centre ice. There, Arvidsson tipped the puck ahead to Forsberg, who managed to stay on-side before breaking in on the left side. He then cut to the low slot, where he slipped a wrist shot under Reimer’s glove.

“I thought Filip himself had a strong game,” Nashville coach John Hynes said. “I thought his attention to detail was strong. When he didn’t have the puck, I thought his details were really good.”

Niederreiter scored an empty-net goal in the game’s final minute.

Forsberg has scored in each of Nashville’s first three games of the season. Last season, Forsberg set a Predators franchise record by scoring in each of the first four games. He can equal his own record Tuesday night should he tally in the second half of the back-to-back set with the Hurricanes.

Svechnikov has a goal in each of Carolina’s first three games of the season. Only Kevin Dineen, 5 in 1990-91 and Eric Staal, 4 in 2005-06 have scored in more games to start the season in Whalers/Hurricanes franchise history.

Nashville has surrendered the first goal in each of the team’s first three games this season. Unlike the first two, the Predators were not able to turn Monday night’s deficit into a victory.

“It was good to feel the puck,” he said. “It’s nice to get shots as long as they don’t get in. It felt good to get into the game and make some saves and kind of get a feel for it.”

Rinne, who has played his entire career in Nashville, started the team’s previous 10 season-opening games prior to this season. Rinne was supplanted as Nashville’s top goaltender midway through last season by fellow Finn Juuse Saros, who posted victories in the Predators first two games against Columbus.

The Predators and Hurricanes return to Bridgestone Arena on Tuesday night to complete the second half of the back-to-back series. This is the first set of back-to-back games for both teams.