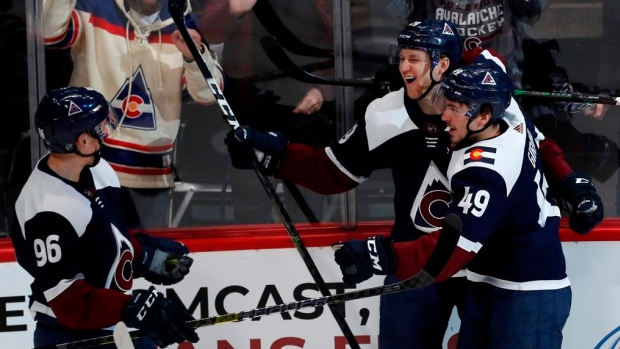 DENVER — Cale Makar refused to make too big of deal out of his milestone moment.

Sure, he's “honoured and stuff” after breaking the Colorado franchise record for most goals by a rookie defenceman.

“But it's not something that I'm going to go home and celebrate,” Makar said.

Makar and Andre Burakovsky scored 22 seconds apart in the second period to chase All-Star goaltender Jordan Binnington from the game and the Avalanche held on to beat the St. Louis Blues 5-3 on Saturday.

The Avalanche used a three-goal middle period to turn a 2-1 deficit into a 4-2 advantage. Tyson Jost also scored in the period. Nathan MacKinnon added a goal in the first and Gabriel Landeskog clinched it with an empty-netter against the defending Stanley Cup champions.

“Everybody's playing their game and I think we're playing confident as a team right now,” Makar said. “It's something we have to continue.”

Makar's 11th goal of the season broke the team mark that John-Michael Liles set in 2003-04. On his goal, Makar circled around the blue line before moving in and lining a shot through a screen.

Burakovsky's goal seconds later was his first in 14 games and had the Blues pulling Binnington for Jake Allen with 3:12 remaining in the second period. Binnington allowed four goals on 11 shots.

“I felt pretty good,” Binnington explained. “They had some quality chances and they capitalized on them.”

Alex Pietrangelo — on his 30th birthday — made things interesting down the stretch by scoring with 12:37 remaining to make it 4-3. The Blues pulled Allen with just under 2 minutes remaining, but couldn't tie it up. Landeskog sealed it with his empty-net goal with 1.8 seconds left.

“I liked our jump, our skating,” said Avalanche coach Jared Bednar, whose team is 2-2 against the Blues this season. “We had good energy in our locker room before the game and it carried over onto the ice.”

David Perron and Oskar Sundqvist also had goals for the Blues, who will lead the Central Division heading into the All-Star break. Ryan O'Reilly added two assists, including a brilliant spin pass that set up Sundqvist.

“These are the times when you look at big picture — and the big picture is we've put ourselves in a good spot here for the second half of the season,” Pietrangelo said. “We've got to be proud of where we are.”

Philipp Grubauer stopped 21 shots as Colorado moved to 2-0-2 on its five-game homestand.

After Sundqvist gave St. Louis a 2-1 lead 66 seconds into the second period, Jost tied it with his first goal since Nov. 30. That set off a wave of scoring with Makar and Burakovsky quickly following.

Binnington would like to have another chance at Burakovsky's blast, which went in on the short side.

“Not everybody is perfect every night,” Blues coach Craig Berube said. “We didn't win, but our guys are dialed in. A break is OK right now. When we come back, it's a tough schedule. Got to be ready to go.”

In the first period, it was St. Louis that rallied when Perron scored a power-play goal with 1:56 left in the period. He also collected an assist on Pietrangelo's goal.

Colorado struck first 3:41 into the game as Samuel Girard intercepted a pass near centre ice and dished it over to Mikko Rantanen, who fumbled the puck right back to Girard. The Avalanche defenceman slid a pass through the goal crease to an open MacKinnon.

Girard's assist was his 10th since Jan. 1. Asked to explain his recent assist surge, Girard responded: "I'm just trying to be myself."

NOTES: Blues D Carl Gunnarsson returned to the lineup for the first time since Dec. 12. He's been out with an upper-body injury. ... Avs F Joonas Donskoi (concussion protocol) missed a fourth straight game. He's skating in a non-contact sweater. ... The Avalanche moved to 3-0 in day games this season.

Blues: Off until Jan. 27 when they play in Vancouver.

Avalanche: Host Detroit on Monday before the All-Star break and bye week.